The Geometry of Love: Space, Time, Mystery, and Meaning in an Ordinary Church - eBook
By: Margaret Visser 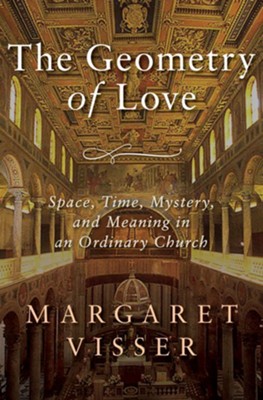 The Geometry of Love: Space, Time, Mystery, and Meaning in an Ordinary Church - eBook

▼▲
A "delightful" tour of Rome’s St. Agnes Outside the Walls, examining the stories, rituals, and architecture of this seventeen-hundred-year-old building (The Christian Science Monitor).

In The Geometry of Love, acclaimed author Margaret Visser, the preeminent "anthropologist of everyday life," takes on the living history of the ancient church of St. Agnes. Examining every facet of the building, from windows to catacombs, Visser takes readers on a mesmerizing tour of the old church, covering its social, political, religious, and architectural history. In so doing, she illuminates not only the church’s evolution but also its religious legacy in our modern lives. Written as an antidote to the usual dry and traditional studies of European churches, The Geometry of Love is infused with Visser’s unmatched warmth and wit, celebrating the remarkable ways that one building can reveal so much about our history and ourselves.

▼▲
Margaret Visser writes on the history, anthropology, and mythology of everyday life. Her most recent book is The Gift of Thanks. Her previous works, Much Depends on Dinner, The Rituals of Dinner, The Way We Are, and The Geometry of Love, have all been bestsellers and have won major international awards, including the 1989 Glenfiddich Award for Food Book of the Year in Britain and the International Association of Culinary Professionals’ Literary Food Writing Award and Jane Grigson Award. In 2002, Visser gave the Massey Lectures on CBC Radio, subsequently published as the bestselling book Beyond Fate.
Visser’s works have been translated into French, German, Dutch, Chinese, Italian, and Portuguese. She appears frequently on radio and television and has lectured extensively in Canada, the United States, Europe, and Australia. She divides her time between Toronto, Paris, and southwest France.

▼▲
"Delightful . . . a guidebook that starts where ordinary guidebooks leave off . . . a profound analysis of [St. Agnes Outside the Walls] as a representative of churches, specifically Roman Catholic ones, everywhere." —The Christian Science Monitor

"Margaret Visser makes the journey urgent and necessary, revelatory. . . . She convinces me that I will learn about architecture and archaeology, but also something I might have missed about a more elusive subject—myself." —The Times (London)

"Reading the church building itself as a text, [Visser] renders its language of marble and mosaic into a splendid narrative whose subject is how an architectural space ’can both express and recall epiphany.’ " —The New Yorker

"Wonderful food for the intellect as well as the soul." —Toronto Star

"Visser is a bestselling writer with a far-reaching mind, to whom readers can turn when, convinced of and satisfied with their own rational view of the universe, they wish to know more about that mysterious force that holds millions of people around the world—among them legions of rigorous thinkers, scientists, minds both scholarly and skeptical—on their knees in adoration in an ’ordinary’ church." —The Globe and Mail (Toronto)

▼▲
I'm the author/artist and I want to review The Geometry of Love: Space, Time, Mystery, and Meaning in an Ordinary Church - eBook.
Back
×
Back
×