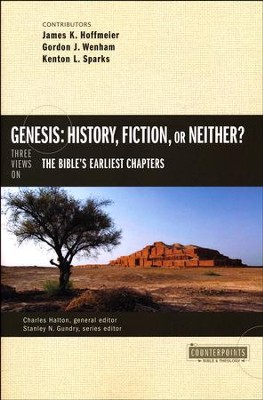 Genesis: History, Fiction, or Neither?

▼▲
Is Genesis properly understood as history, fiction, or something else? Comparing and contrasting three predominant interpretive genres, James Hoffmeier, Gordon Wenham, and Kenton Sparks make a case for Genesis as theological history; proto-history; and ancient historiography respectively. In point/counterpoint arguments they defend their positions and provide examples of each conclusion's implications for biblical understanding.

The nature of the Genesis narrative has sparked much debate among Christians. This book introduces three predominant interpretive genres and their implications for biblical understanding.

Each contributor identifies their position on the genre or genres of Genesis, chapters 1-11, addresses why their interpretation is respectful of and appropriate to the text, and contributes examples of its application to a variety of passages.

General editor and Old Testament scholar Charles Halton explains the importance of genre and provides historical insight in the introduction and helpful summaries of each position in the conclusion.

In the reader-friendly Counterpoints format, this book helps readers to reflect on the strengths and weaknesses of each view and draw informed conclusions in this much-debated topic.

James K. Hoffmeier (PhD, University of Toronto) is professor of Old Testament and Near Eastern archaeology at Trinity International University Divinity School in Deerfield, Illinois. He is the author of Ancient Israel in Sinai and Israel in Egypt, and coauthor of Faith, Tradition and History.


Gordon J. Wenham (PhD, University of London) is tutor in Old Testament at Trinity College, Bristol, England, and professor emeritus of Old Testament at the University of Gloucestershire. He is the author or editor of numerous books, including Story as Torah and commentaries on Genesis, Leviticus, and Numbers.


Kenton L. Sparks (Ph.D., University of North Carolina) is professor of biblical studies and interim provost at Eastern University. He is author of several books, including Ancient Texts for the Study of the Hebrew Bible, God's Word in Human Words, and Sacred Word, Broken Word.


Charles Halton (PhD, Hebrew Union College-Jewish Institute of Religion) is an assistant Professor in Theology at Houston Baptist University. He has contributed to The IVP Dictionary of the Old Testament: Prophets and Reading Akkadian Prayers and Hymns: An Introduction. He is the co-author of The First Female Authors: An Anthology of Women's Writing in Mesopotamia and he maintains a blog at Awilum.com. He resides in Louisville, Kentucky.

▼▲
I'm the author/artist and I want to review Genesis: History, Fiction, or Neither?.
Back
Back