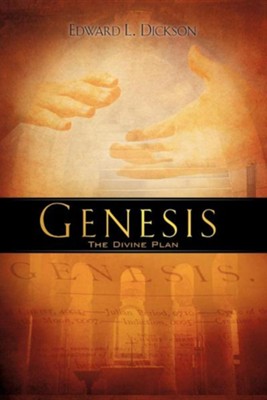 ▼▲
The book opens with the creation of all things and fall of man. From there man began spiraling downward to the days of Noah and the great flood. Then, out of nowhere, emerges a man named Abraham. God invested enormous grace in him to make him the forerunner of a nation that He would call His own. This seems very exclusionary, but this is the Divine Plan. Abraham was one of those singular figures in the Bible. He had two sons, Isaac and Jacob, who attempted to imitate him; some may question if they did. These three men and their children dominate the book from the flood of Noah's day to the death of Joseph. Through their lives God reveals His Divine Plan of the ages. It is a treasury of knowledge that will help us to understand Him. "Come now and let us reason together.," Isaiah 1:18. Edward Dickson is a pastor in rural Mobile, Alabama. A good beginning was to be a graduate of William Carey College, then of New Orleans Baptist Seminary, but many other bits of wisdom and insight have been gathered over a life time pastorate at one church, and all these things have come together in an in depth study of the Book of Genesis. This is a devotional commentary aimed at understanding the plan that God has designed for the human race. It is a gateway into the rest of the Bible. It is much like going into a theme park filled with many exciting and interesting things. Stop at this gate, called Genesis, before proceeding, and get the guidance you need to proceed down the avenues of the rest of the Bible.

▼▲
I'm the author/artist and I want to review Genesis.
Back
×