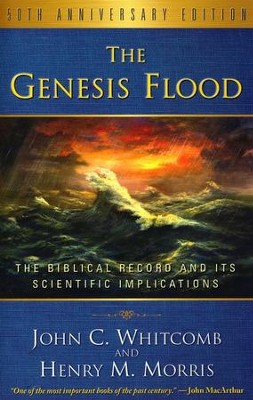 The Genesis Flood: The Biblical Record and Its Scientific Implications, 50th Anniversary Edition

▼▲
The year 2011 marks the 50th anniversary of The Genesis Flood, the book that launched the modern creation science movement. In continuous print since 1961, this seminal work by Dr. Henry Morris and Dr. John Whitcomb offers a definitive treatment of the biblical and scientific evidence of the global Flood in the days of Noah, presenting a solid case for the Bible's authority and accuracy in all areas.

▼▲
Presents a thorough system unifying and correlating scientific data in the earth’s early history. Whitcomb and Morris propose a biblically based system of creationism and catastrophism. A modern classic, this title has become required reading for creationists.

▼▲
“The Genesis Flood by Morris and Whitcomb is one of the most important books of the past century. Prior to its publication in 1961, evangelicals were for the most part unprepared to answer evolutionists’ and modern geologists’ claims about the antiquity of the earth. Many blithely assumed that the days of creation in Genesis 1 represented long ages; others held to the 'gap theory'—the idea that vast eons elapsed between the initial creation of the heavens and earth (Genesis 1:1) and the formation of life as we know it (starting in Genesis 1:2). The Genesis Flood showed why such theories don’t do justice to the inspiration and authority of Scripture. The book revived evangelicals’ interest in flood geology, demonstrating that most of the geological phenomena usually cited as 'proof' of the earth’s antiquity are better explained as evidence of a catastrophic universal flood, as described in Genesis 6–8. In recent years young-earth creationism has come under heavy attack in evangelical circles again, and The Genesis Flood is as timely, thought-provoking, and helpful as ever. . . . A tour de force and a must-read resource for pastors, teachers, scientists, and anyone who is troubled by the conflict between the biblical account of creation and the ever-changing claims of modern evolutionary theory.” -- John MacArthur, President, The Masters University and Seminary

"When The Genesis Flood was published it was the combined voice of two courageous men crying, as it were, in the wilderness. They dared to take a stand against the pervading compromise on the issue of creation and the flood by robustly tackling head-on the uniformitarian geological assumptions that underpin the secular worldview on origins that had mesmerized so many Christians into compromising the opening chapters of God’s Word. Single-handedly these men with this book kindled a fire that today is still raging. Little did they know the global impact this book would have. Like so many others I know, I read this book as a young Christian in my teenage years when I was already a budding geologist, and it totally resolved my ongoing struggle to reconcile the geology I was learning in the secular textbooks with the true account of earth’s history in God’s Word. Not only did this book convince me that God’s Word provides the only reliable basis for understanding geology, but it was foundational in igniting my passion for and calling into full-time creation ministry to uphold the truth of God’s Word and defend it from compromise, beginning at the very first verse. This book remains a classic work that is a must-read for those who would be informed and equip themselves both to stand on the authority of God’s Word in every area of life and knowledge and to defend their Christian faith." -- Andrew Snelling, BSc (Applied Geology) PhD (Geochemical Geology)

"I have been privileged to have witnessed the rising biblical creation movement for the past forty years and have seen it used mightily by God to blossom into a major international force. The movement not only has shaken the evolutionary, “millions of years” establishment, but more importantly has equipped the church to share our Christian faith with renewed boldness. The publishing of The Genesis Flood fifty years ago is the recognized birthdate of a movement blessed by God, and this classic work is also now recognized as a monumental milestone in the fight against compromise in the church and for biblical inerrancy in general during our skeptical modern era. Finding a copy of The Genesis Flood in an Australian bookstore and devouring its contents was a key event that led me to join the modern biblical creation movement in the 1970s. Drs. Whitcomb and Morris became real ‘heroes of the faith’ for me. I saw them as giants in Christian apologetics." -- Ken Ham, BSc (Environmental Biology), President, Answers in Genesis and The Creation Museum

Q: I understand that the book "The Genesis Flood" is paperback and has 556 pages. How thick is it and how much margin does it have around the type? I am thinking about putting a spiral wire binder on it.

Q: Is the paper back version of "The Genesis Flood" the same as the Hard back version? Any differences in content?

The 50th Anniversary Edition has 3 new endorsements (Dr. John MacArthur, Ken Ham, and Dr. Andrew Snelling); a new 4-page forward by Drs. Henry M. Morris III and John D. Morris, 4 pictures of the authors and their families; and a new 9-page preface from Dr. John C. Whitcomb. The main content of the book has not changed.

▼▲
I'm the author/artist and I want to review The Genesis Flood: The Biblical Record and Its Scientific Implications, 50th Anniversary Edition.
Back
Back