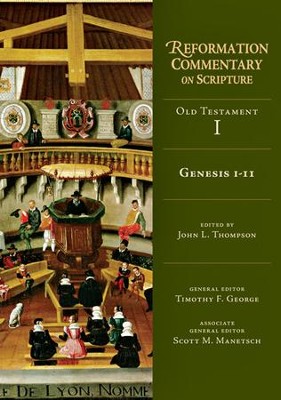 ▼▲
Discover how noted commentators, including Calvin and Luther, as well as lesser-known Reformation figures---Catholic and Protestant---can provide insightful and startling fresh readings of familiar passages. Finding their own era deeply connected to the tragedies and promises of Genesis, they used Scripture as an anchor for their teaching, preaching, and hope. 360 pages, hardcover from InterVarsity.

The first chapters of Genesis are the bedrock of the Jewish and Christian traditions. In these inaugural pages of the canon, the creation of the world, the fall of the human creature, the promise of redemption and the beginning of salvation history are found. Interwoven in the text are memorable stories of the ancient biblical patriarchs and matriarchs. Throughout the history of commentary, interpreters have lavished attention on the rich passages recounting the six days of creation, the tragic fall of God's creature--from the expulsion of the first parents to Cain's fratricide and the catastrophe of the Flood--as well as the allegorical sign of hope in the ark of Noah. Commentators in the Reformation continued this venerable tradition of detailed focus on these primordial stories, finding themselves and their era deeply connected to the tragedies and promises, the genealogies and marvels of God's providential election and governance. Above all, Reformation-era interpreters found anchor for their teaching, preaching and hope in the promise of Christ running through these first chapters, from creation to the calling of Abraham. While following the precedent of patristic and medieval commentators on Scripture, as well as Rabbinic midrash, the Reformers provide insightful and startling fresh readings of familiar passages, inviting readers to see the ancient text with new eyes. This volume collects the comments of not only the monumental thinkers like Luther, Calvin and Melancthon, but also many important figures of the time who are lesser-known today. Here we find rich fare from Johannes Brenz, Wolfgang Capito, Hans Denck, Wolfgang Musculus, Johannes Oecolampadius and Peter Martyr Vermigli. Readers will encounter comments from a wide array of perspectives, from the magisterial Reformers to radical Protestants like Balthasar Hubmaier, Menno Simons, Pilgram Marpeck and Dirk Philips, as well as some Catholic thinkers, such as Desiderius Erasmus and Cardinal Cajetan. Important contributions from female voices, like Katharina Schütz Zell and Anna Maria van Schurman are included also. The wealth of Reformation interpretation is brought together here for study and reflection, much appearing in English for the first time.

John L. Thompson is professor of historical theology and Galen and Susan Byker Professor of Reformed Theology at Fuller Theological Seminary, Pasadena, California. He is a contributor to the Global Dictionary of Theology (InterVarsity Press), the author of John Calvin the Daughters of Sarah (Droz) and Writing the Wrongs (Oxford), and the coeditor of Biblical Interpretation in the Era of the Reformation (Eerdmans). He is married to another InterVarsity Press author, Marianne Meye Thompson.

"With regard to the express goals of this series, indeed, it broadens our exegetical horizons to include the voices of the Reformation. It will undoubtedly find its way into the contemporary preaching of the World, and as we are on the cusp of the 500th anniversary of the sixteenth-century Reformation, we will inevitable grow in our interest of the Reformers and their words, perspectives, theologies, and passions. What a better place to start this journey of reading the Bible with the Reformers than where the Bible begins--in Genesis. Not only is this commentary compilation of the Reformers enlightening and impactful but I must also admit that it is nothing short of--if I may use the word--fun."

"This particular volume and this series promise to be welcome resources for exegetes, preachers, and theologians."

"As you can imagine, this work is a goldmine of content on Genesis 1-11. . . . Fifty or more commentaries on Genesis appeared in the sixteenth century, and Thompson has concluded a labor of love in working through them and selecting useful excerpts. The Reformation was an era of biblical revival. May God use this series for similar work in our day."

"This commentary provides a rich selection of interpretations, exposing readers to lesser-known interpreters like Christopher Pelargus rather than simply invoking the familiar names of Lutehr, Calvin and Swingli."

"This volume is an example of the current trend in biblical scholarship that favors a theological interpretation of Scripture over a purely historical-critical analysis of the text. This new approach encourages pastors and theologians to learn once against to read the Bible as the church's book revealing God's Word to the world. "John Thompson, the editor of this volume, has compiled selections from the Reformers' commentaries on the first eleven chapters of Genesis that exhibit the practice of theological exegesis. As such, they are markedly in sync with the patristic doctrines of Nicene and Chalcedonian orthodoxy. "As precritical biblical theologians, the Reformers obviously did not have at hand the literary and historical methods of modern biblical criticism. Yet, such a lack did not prevent them from gaining a profound understanding of what God intended to reveal in the book of Genesis about the creation of the world, the fall of humankind, the reality of sin as the backdrop to the history of redemption that culminated in the New Testament gospel of Jesus Christ. All the Reformers were united in a thoroughgoing christological reading of the Hebrew Bible as Christian Scripture. "This volume makes refreshingly clear the extent to which the Reformation interpreters of Genesis did not get bogged down in the kinds of fruitless squabbles so prevalent in subsequent Protestantism, say, between fundamentalism and modernism, creationism and evolutionism. The Reformers read and interpreted Genesis in search of what is theologically significant for the Christian faith and the preaching of the church. This volume will help contemporary believers in Jesus Christ and members of His church to do the same today."

"Thompson's commentary on Genesis 1-11 reminds me that our present debates are not as novel as we may assume, nor--despite their place in scientific and doctrinal history--were our Reformation predecessors less insightful, sophisticated or creative than we in their interpretation of biblical origins."

"The volume is an excellent reference tool that will enhance any theological library. It also effectively whets the reader's appetite for other volumes in the series, almost all of which are still forthcoming. Thompson's fine editorial work has set a high bar for subsequent editors in the series."

▼▲
I'm the author/artist and I want to review Genesis 1-11: Reformation Commentary on Scripture [RCS].
Back
Back