Skip to main content
OUR BIGGEST BARGAIN SALE EVER: Over 6,000 deals at never-seen-before prices ~ through 8/23. Shop now >
Generous Justice: How God's Grace Makes Us Just [Paperback]
By: Timothy Keller
Stock No: WW486074 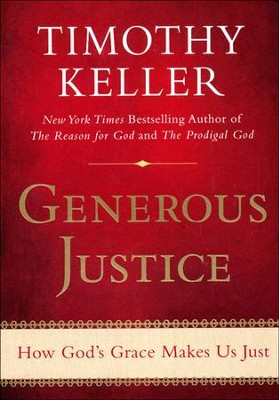 Throughout the Old Testament we see God's love for the entire nation of Israel, but we also see Him reaching out to individuals--the widows, orphans, and aliens. His instructions to His people included a charge to show mercy and bring justice to the needy. In the New Testament we see this played out in Jesus' life as well. With His hands he touched the sick, the lonely, and brought healing to both body and spirit. At Pentecost, when the Spirit invaded the hearts and minds of believers it continued the legacy of God's life poured into His people, for the purpose of pouring out mercy to the lost and least of these. Like a great revolving door of grace, God has been in the business of loving, saving, and equipping His people so they can love and save others throughout the whole of Scripture.

In Generous Justice: How God's Grace Makes Us Just, pastor of Redeemer Presbyterian Church Tim Keller, explores the connection between when believers in Christ receive grace, and how that impacts the world around them. He argues that the Bible is a trustworthy guide for living a life of justice, and denies the claims of skeptics that the Bible has been a regressive influence in the world. Sharing examples from the lives of believers around him, and giving support from the Bible, Keller outlines a hopeful manifesto for all who seek to show God's mercy to the world.

▼▲
Renowned pastor and bestselling author of The Prodigal Prophet Timothy Keller shares his most provocative and illuminating message yet.

It is commonly thought in secular society that the Bible is one of the greatest hindrances to doing justice. Isn’t it full of regressive views? Didn’t it condone slavery? Why look to the Bible for guidance on how to have a more just society? But Timothy Keller challenges these preconceived beliefs and presents the Bible as a fundamental source for promoting justice and compassion for those in need. In Generous Justice, he explores a life of justice empowered by an experience of grace: a generous, gracious justice. This book offers readers a new understanding of modern justice and human rights that will resonate with both the faithful and the skeptical.

▼▲
Timothy Keller was born and raised in Pennsylvania and educated at Bucknell University, Gordon-Conwell Theological Seminary, and Westminster Theological Seminary. His first pastorate was in Hopewell, Virginia. In 1989 he started Redeemer Presbyterian Church in New York City with his wife, Kathy, and their three sons. Today, Redeemer has nearly six thousand regular Sunday attendees and has helped to start more than three hundred new churches around the world. He is the author of Hidden Christmas, Making Sense of God, The Songs of Jesus, Preaching, and Prayer, as well as The Meaning of Marriage, The Prodigal God, and The Reason for God, among others.

"Keller shows us how a . . . spirit—one of generosity coupled with justice—can thoroughly alter not only a person but, ultimately, society as a whole. . . . Many gems are to be mined from Generous Justice." —The Washington Times

"Generous Justice is the best book I've ever read about putting Christian faith into action. . . . Were all Christians to respond to Keller's understanding of Biblically based justice, it wouldn't simply result in more social programs, food and shelter, and health care for the needy. It would result in a world defined by shalom, a comprehensive peace, a world in which human beings flourish." —Beliefnet.com

"This is the most biblically informed and intellectually careful (read the footnotes!) 'social justice' book I know of. Justice skeptics and justice proponents alike will learn from Generous Justice." —Kevin DeYoung, TheGospelCoalition.org

"A great book . . . Keller cuts through the highly charged rhetoric and presents a clear, biblical call for the church to 'do justice.'" —EFCAToday.org

▼▲
I'm the author/artist and I want to review Generous Justice: How God's Grace Makes Us Just [Paperback].
Back
Back