Skip to main content
OUR BIGGEST BARGAIN SALE EVER: Over 6,000 deals at never-seen-before prices ~ through 8/23. Shop now >
Next Generation Leader: Five Essentials for Those Who Will Shape the Future
By: Andy Stanley
Stock No: WW525396 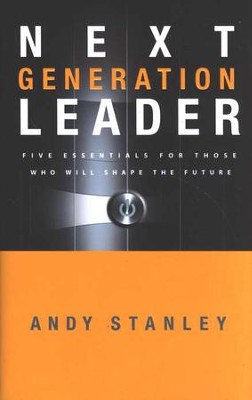 Next Generation Leader: Five Essentials for Those Who Will Shape the Future

▼▲
The Next Generation Leader has been challenging young Christians eager to learn, grow, and lead in ministry or in the marketplace since its original release in 2003. Now with an all-new look, this repackaged version continues to advance the mission of the first release. Mentoring young leaders as they face the unique issues of a changing world has been pastor and bestselling author Andy Stanley's passion for more than a decade. Here he shares material from his leadership training sessions, developed to address essential leadership qualities such as character, clarity, courage, and competency. This is the perfect guide for any new leader - or for the mentor of a future leader!

The Next Generation Leader has been challenging young Christians eager to learn, grow, and lead in ministry or in the marketplace since its original release in 2003. Now with an all-new look, this repackaged version continues to advance the mission of the first release. Mentoring young leaders as they face the unique issues of a changing world has been pastor and bestselling author Andy Stanley’s passion for more than a decade. Here he shares material from his leadership training sessions, developed to address essential leadership qualities such as character, clarity, courage, and competency. This is the perfect guide for any new leader—or for the mentor of a future leader!

"Capable men and women will eventually catch, pass, and replace the current generation of leaders," says Stanley. "Embracing these essentials, you will not only excel in your personal leadership, but also ensure a no-regrets experience for those who choose to follow you."

" Andy Stanley ’s The Next Generation Leader will equip the messengers to stand a little taller with a vision of hope and promise as they engraft these timeless principles into their daily lives."
—Dan T. Cathy, president and CEO, Chick-Fil-A Corporation

"It’s obvious that what Andy Stanley has to say in The Next Generation Leader comes straight from the gut of someone who is in the leadership game and is winning at it."
—Bill Hybels, senior pastor, Willow Creek Community Church

" Andy Stanley offers a fresh perspective on ageless truths that will be of enormous benefit to today’s leaders and to future generations."
—Patrick S. Flood, chairman and CEO, HomeBanc Mortgage Corporation

Andy Stanley, the senior pastor of the North Point Ministries campuses with a cumulative congregation of more than twenty thousand, admits he has one single, core passion. He lives to train and mentor young leaders to be the best they can be! He sees the "next gen" need for quality Christian resources on leadership and wrote this book entrenched in leadership himself, desiring to guide the up-and-coming young men and women who will shape our future.

▼▲
Pastor Andy Stanley's book Next Generation Leader: Five Essentials for Those Who Will Shape the Future is one of those books you want to read with a highlighter in your hands. It isn't that what he is saying hasn't been said in other motivation and leadership training books, it's the fact that he says his message in an honest, disciplined, yet loving tone. It comes off like a lecture you want to hear. He doesn't pull punches in laying out the need for focus, task priorities, strong personal ethics, vision, and continuous training.
A lot of what Stanley shares is comparable to more famous writers. For example, section four on listening, learning, and being and finding a coach is similar to the "sharpen your saw" lesson from Stephen R. Covey. Nevertheless, because Stanley purposefully gives his message a strong Christian bent toward stewardship of time, righteous personal development, and service to Christ in all we do, it becomes unique to his book and message. For a fact, Stanley gives credit to Covey, John Maxwell, Warren Bennis, Max DePree, and Jim Collins for how their pioneering works influenced his thinking and leadership development. However, Stanley provides something these trainers do not. Stanley presents biblical role models to exemplify the fact that great leaders exhibit similar traits despite the era in which they live or the challenge presented to them. He cites Shadrach, Meshach, and Abednego as examples of men with courage, to stand against mob mentality, even to the point of forfeiting their lives if necessary. He draws lessons from David in regard to courage after proper preparation.
Stanley is the senior pastor of North Point Community Church and four satellite congregations in Georgia. His first rule in undertaking a leadership job is to focus on only those matters you can do and to delegate the rest. (He laughs and says the leader gets the credit anyway, when things go right.) Eliminating tasks that are not the leader's primary objectives is a great lesson in success. His other points focus on: courage in times of uncertainty, since no one can predict the future with exactness; clarity of mission, since people will follow even a flawed leader if they are convinced he knows where he's going; and honesty and good character, since the leader is never off-stage but is always being examined to see if he walks his talk.
This is not difficult reading, but you will find yourself pausing to think through specific lines, lessons, and anecdotes. There is meat here. I'm going to wait a month and then read this book a second time.  Dr. Dennis E. Hensley, Christian Book Previews.com

▼▲
I'm the author/artist and I want to review Next Generation Leader: Five Essentials for Those Who Will Shape the Future.
Back
Back