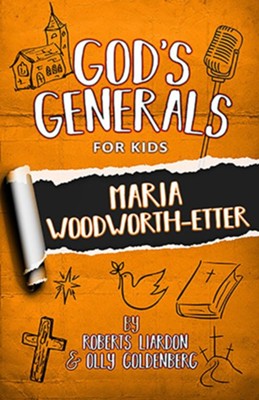 ▼▲
Newly released  and enhanced Volume Four, Maria Woodworth-Etter now  includes an updated study section with cross curricular themes, suitable for  home schooling groups This very popular book  takes a look at the story of Maria Woodworth Etter. She had a very tough childhood and, as she grew older, life wasn't always easy. It was only when she turned to God that she found a peace that would not go away. As she obeyed God, many people were saved and healed. She also experienced strange trances and heard God speaking to her, but the world could not understand her. Newspapers accused her of making people go crazy, and she was often threatened by hooligans. Through all of this, she kept on following God, even though she never knew that growing older, life wasn't always easy. It was only though, that God would always be with her. As you read about Maria, you will see how God can use you, too, as you learn to obey Him. If she were here today, she would say to you, "Learn about God and salvation through His Son, Jesus Christ. Pray and ask the Lord to lead your life, and then listen carefully, for you, too, may be called to be a trailblazer for God.

▼▲
Roberts Liardon is an author, public speaker, spiritual leader, church historian, and humanitarian. He was born in Tulsa, Oklahoma. He was the first male child born at Oral Roberts University, and he was named in honor of the university's founder. He is a well-known author and public speaker, and his books have been translated into more than 50 languages. Roberts has written more than 50 books, and he has ministered in over 112 countries.
Olly Goldenberg has been ministering to children and young people for over 20 years. For many years, he led a children's ministry that grew to be one of the largest in Europe. He now works with his wife, Helen, to lead Children Can, a ministry that equips leaders and inspires churches that children can do all things through Christ. Through their ministry, thousands of children have fallen in love with Jesus, and gone on to do incredible things for him. He is the author of several books.

▼▲
I'm the author/artist and I want to review God's Generals For Kids: Maria Woodworth-Etter / Enhanced edition.
Back