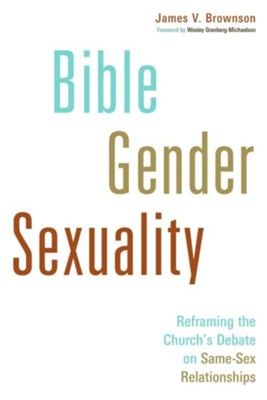 This thought-provoking book by James Brownson develops a broad, cross-cultural sexual ethic from Scripture, locates current debates over homosexuality in that wider context, and explores why the Bible speaks the way it does about same-sex relationships.

Fairly presenting both sides in this polarized debate — "traditional" and "revisionist" — Brownson conscientiously analyzes all of the pertinent biblical texts and helpfully identifies "stuck points" in the ongoing debate. In the process, he explores key concepts that inform our understanding of the biblical texts, including patriarchy, complementarity, purity and impurity, honor and shame. Central to his argument is the need to uncover the moral logic behind the text.

Written in order to serve and inform the ongoing debate in many denominations over the questions of homosexuality, Brownson's in-depth study will prove a useful resource for Christians who want to form a considered opinion on this important issue.

▼▲
James V. Brownson is James I. and Jean Cook Professor of New Testament at Western Theological Seminary, Holland, Michigan. His other books include Speaking Truth in Love: New Testament Resources for a Missional Hermeneutic.

▼▲
Search
"Brownson's argument is careful and sensitive. . . . An important addition to the conversation on the Church's response to people in same-sex relationships."

Books at a Glance
"[A] thoughtful, complex and comprehensive work."

Wesley Granberg-Michaelson (from foreword)
"Instead of being trapped in shallow debates over the meaning of a few isolated biblical passages, James Brownson grounds his approach in foundational biblical understandings of gender and sexuality. He takes the Bible seriously, engaging it faithfully and deeply, and he encourages the reader to do the same. . . . The church needs this book."

David G. Myers
— author of A Friendly Letter to Skeptics and Atheists
"With gentle wisdom Brownson reveals an implicit moral logic beneath scriptural teachings about sexuality and same-sex relationships. His insights — which are both prophetic and pastoral — build a much-needed bridge across the sexual divide that separates people of shared biblical faith."

Brian McLaren
— author of Naked Spirituality: A Life with God in 12 Simple Words
"Jim Brownson has written what I believe is a 'game-changing' book on the hotly disputed topic of same-sex orientation and relationships in light of the Bible. He approaches the biblical texts with no less care and respect than the most conservative or traditional scholars, but he makes overt and clear what many seem unconscious of — the moral logic that operates in a text. By surfacing and grappling with that moral logic, Brownson can explore the why behind the what of biblical prohibitions. In so doing, he provides not only a masterful work on human sexuality in light of Scripture, but also a model for the kind of robust and faithful biblical hermeneutic that our churches desperately need at this point in our history."

Peggy Campolo
— speaker, writer, and editor
"If ever a book spoke the good news of the gospel with biblical authority to those children of God who happen not to be straight, it is this book. Brownson addresses with clarity an issue that is tearing the church of Jesus Christ apart, as he gently insists that all of us allow new facts and insights to illuminate our understanding of what Scripture has to say to gay and lesbian Christians."

Booklist (STARRED review)
"An outstanding presentation of academic scholarship to general readers. . . . Reframes biblical debate about same-sex relationships. . . . This strikes to the heart of the Bible-versus-homosexuality fracas."

Englewood Review of Books
"Fascinating and incredibly helpful. It would be hard to suggest that Brownson is anything other than meticulous, transparent, and authentic in his treatment of the issues and of scripture."

Studies in Christian Ethics
"Perhaps the greatest challenge facing those seeking to argue a biblical basis for same-sex unions is that — in contrast to debates over gender equality or war or remarriage after divorce — the canonical evidence is uniformly, often strongly, negative. Brownson's work asks whether there is anything inherent in the moral logic that shapes the Bible&#39;s discussion of one-flesh unions that not only&#160;<I>assumes</I>but also&#160;<I>requires</I>&#39; (p.106, italics original) such unions to be male and female. Answering in the negative, he has presented the most thorough case so far that one can still be faithful to the Bible by going beyond its explicit witness in this area and appealing to moral logic and cultural change to argue thatwhat is normal in the biblical witness' — only male-female sexual unions — `may not necessarily benormative' (p. 109, italics original)."

Library Journal
"A remarkably thorough, patient, and learned treatment of the knotty questions that surround Christian stances toward same-sex relationships. . . . [Brownson's] writing and thinking are deliberate and clear, and may supply a crucial tool for discussion based neither on impulse nor unexamined cultural tradition."

The Bible Today
"This thoughtful book bears reading as an example of a civil and earnest discussion of a sensitive issue."

Theological Studies
"An ambitious challenge to Christians to read the Bible imaginatively if they wish to understand more fully elements found in committed same-sex relationships."

Biblical Theology Bulletin
"In the ongoing debate surrounding same-sex relationships in general, and same-sex marriage in particular, James Brownson's recent work is a welcome addition, providing a calm and well-reasoned examination of Christian Scripture that can be appreciated by all sides of the debate. Regardless of whether or not a person ultimately agrees with Brownson's conclusions, readers on all sides should find food for thought at numerous points throughout the book."

Review of Biblical Literature
"This work has taken the church forward in its deliberations regarding the same-sex debate, both in terms of the centrality of Scripture and of the concerns that face us today."

Times Literary Supplement
"A thorough discussion. . . . Brownson concludes that it is crucial to frame passages that worry about ancient cultic sexual excess or hierarchical relationships between men and women in the cultural assumptions of their time. These assumptions may be as alien for many today as are those of the ancient Near East on slavery."

▼▲
I'm the author/artist and I want to review Bible, Gender, Sexuality: Reframing the Church's Debate on Same-Sex Relationships.
Back
×