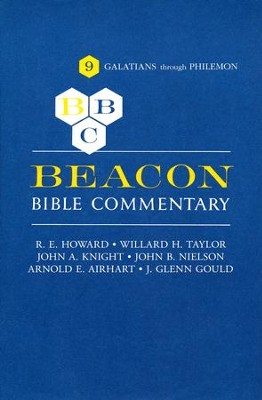 ▼▲
The Beacon Bible Commentary is a comprehensive interpretation of the Scriptures based on the King James Version and written by 40 scholars of conservative theological persuasion. It consists of 10 volumes, five in the Old Testament and five in the New. The presentation includes exposition, exegesis, and homiletical suggestion, which makes the set particularly valuable to ministers and Sunday school workers. But it also has a devotional quality which makes it appealing to all serious students of the Bible. The series is sound in scholarship, reasonable in interpretation, and inspirational in tone. Its format and style are attractive and practical. The contributors and publishers trust that this work will be helpful to all who seek to discover the deeper truths in God's Word, "which liveth and abideth for ever."

▼▲
Insights from 40 Bible scholars, with in-depth explanations of Scripture, critical analysis of key words and phrases, and outlines for expository preaching. Based on KJV. Cloth with jacket.

▼▲
Richard (Dick) Howard is Professor Emeritus of New Testament and Greek at Southern Nazarene University. He has also served as chairman of the Department of Religion at Eastern Nazarene College. His early career years were invested as a pastor in Massachusetts and Maine. He and his wife, Winifred, reside in Bethany, Oklahoma. John A. Knight, Ph.D., is a general superintendent emeritus in the Church of the Nazarene. Prior to assuming the highest elected position in his denomination in 1985, he served with distinction as presidents of Bethany Nazarene College (now Southern Nazarene University) and Mount Vernon Nazarene College, editor of the Herald of Holiness, as well as pastor and professor. Willard H. Taylor, Ph.D. Dr. Taylor (deceased) served as dean and professor of biblical theology at the NazareneTheologicalSeminary, Kansas City. He was a graduate of Olivet Nazarene College and reiceived his M.A. and Ph.D. degrees from Garrett Theological Seminary (Northwestern University). He took additional graduate studies at the University of Chicago. He joined the seminary faculty in 1961 after serving three years as president of Canadian Nazarene College, Red Deer, Alta. He also served in the pastorale for 10 years. He wrote for numerous perlodicais, theological dictionarles, and scholarly journals, and was a contributor to Exploring Our Christian Faith and Beacon Bible Commenary. He was coeditor of the 12 volume Beacon Bible Expositions. Arnold E. Airhart is dean of Nazarene Bible College, Colorado Springs, Colo., which position he assumed in 1974 after an extended term as president of Canadian Nazarene College, Winnipeg, Manitoba. Born and reared in western Canada, he is a graduate of Canadian Nazarene College and of Nazarene Theological Seminary. After five years in the pastorale, he returned to his alma mater in 1949 to teach religion, and in 1952 became its president. In 1952 he accepted a call to pastor in Toronto, but in 1961 returned to the presidency of the college. He was honored with a Doctor of Divinity degree by Northwest Nazarene College in 1955. Dr. Airhart has served on several general church commissions and was author of the Thessalonians section of Beacon Bible Commentary.

▼▲
I'm the author/artist and I want to review Galatians-Philemon (Beacon Bible Commentary).
Back
Back