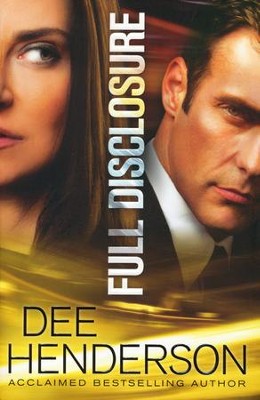 ▼▲
Top FBI cop Paul Falcon knows Ann Silver is one of the most respected homicide investigators in the Midwest. So when a supsicious death causes their worlds to collide, he hopes she'll be a useful colleague. He never expects to be smitten! Still, he wonders . . . Why does everybody trust her? What secrets is she keeping?

▼▲
Dee Henderson Is Back!

Ann Silver is a cop's cop. As the Midwest Homicide Investigator, she is called in to help local law enforcement on the worst of cases, looking for answers to murder. Hers is one of the region's most trusted investigative positions.

Paul Falcon is the FBI's top murder cop in the Midwest. If the victim carried a federal badge or had a security clearance, odds are good Paul and his team see the case file or work the murder.

Their lives intersect when Ann arrives to pass a case off her desk and onto his. A car wreck and a suspicious death offer a lead on a hired shooter he is tracking. Paul isn't expecting to meet someone, the kind that goes on the personal side of the ledger, but Ann Silver has his attention.

The better he gets to know her, the more Paul realizes her job barely scratches the surface of who she is. She knows spies and soldiers and U.S. Marshals, and has written books about them. She is friends with the former Vice President. People with good reason to be cautious about who they let into their lives deeply trust her. Paul wonders just what secrets Ann is keeping, until she shows him the John Doe Killer case file, and he starts to realize just who this lady he is falling in love with really is...

▼▲
Dee Henderson is the bestselling, award-winning author of 15 previous novels, including the acclaimed O'MALLEY series and UNCOMMON HEROES series. She is a lifelong resident of Illinois. Learn more at www.deehenderson.com.

▼▲
With gratuitous sex off the table in Christian fiction, Henderson (the OMalley and Uncommon Heroes series) has more space to weave a fascinating mystery into a romance. When homicide cop Ann Silver crosses paths with FBI murder investigator Paul Falcon, they team up to unravel the two most heinous serial murder cases of recent times. The more Falcon finds out about Silver, the more he falls in love. Before she can follow suit, however, Silver will have to reveal some secrets that have been giving her nightmares. Silvers a cop and a writer, but Falcon begins wondering why she knows so many high-level people, including a former Vice President of the United States. Rather than provide textured characterization, Henderson relies on gimmicks. Still, theres an ending as twisty and satisfying as spiral macaroni. Publisher Bethany House is betting that Henderson, a two-time Christy Award winner, will bounce back in a big way after a writing hiatus; the first printing is 125,000. (Oct.) 2012 Reed Business Information

▼▲
I'm the author/artist and I want to review Full Disclosure.
Back
Back