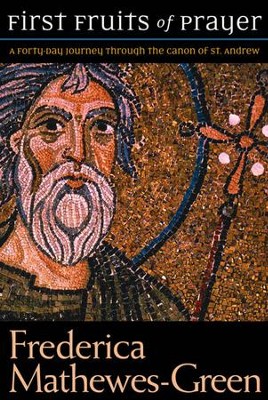 First Fruits of Prayer: A Forty Day Journey Through the Canon of St. Andrew - eBook

▼▲
Frederica Mathewes-Green in First Fruits of Prayer brings readers from all backgrounds of the Christian faith into the history and experience of the first 1000 years of Christendom. By guiding readers through the Canon of St. Andrew, Greene shows how ancient believers worshipped Christ while using this great poetic eighth-century hymn, still chanted in the Eastern church during Lent. This insightful book is ideal for use during the Lenten season, but can be read throughout the year for enriching your prayers and enhancing your Christian spirituality.

▼▲
Join Frederica Mathewes-Green on a guided retreat through an ancient Orthodox text. Regardless of your denominational background, First Fruits of Prayer will bring to life the prayer experience of first millennium Christianity through immersion in this poetic hymn, an extraordinarily beautiful work that is still chanted by Christians around the world each Lent. It weaves together Old and New Testament Scriptures with prayers of hope and repentance and offers ancient ways of seeing Christ that still feel new today. "Fascinating and sometimes magisterial…. A skilled interpreter of the theology and history of the Orthodox tradition, Mathewes-Green arranges the Great Canon of St. Andrew…into 40 readings accompanied by scriptural references, commentary, theological reflection and questions." —Publishers Weekly "Rick Warren gave us 40 days of purpose. Frederica Mathewes-Green gives us 40 days of deep prayer and reflection…. This is destined to become a devotional class for generations to come." —Dallas Morning News

▼▲
Raised in Charleston, South Carolina, Frederica Mathewes-Green received her B.A. in English from the University of South Carolina and her M.A. in Theological Studies from Virginia Episcopal Theological Seminary. Considering herself a Hindu, in 1974 Frederica married Gary Mathewes-Green and set off for a back-packing honeymoon in Europe. There she experienced a "totally undeserved miraculous conversion" that changed the course of her life. Returning to the U.S., she and Gary both attended seminary, and Gary became an Episcopal priest. After spending fifteen years in the Episcopal Church, Gary fell in love with Orthodoxy and became a priest of the Eastern Orthodox Church. In 1993 the couple founded the Holy Cross Orthodox Church in Baltimore, Maryland. Frederica's initial struggle with and eventual reception into the Orthodox Church became the catalyst for her widely acclaimed book, Facing East: A Pilgrim's Journey into the Mystery of Orthodoxy. Two years later, she published At the Corner of East and Now: A Modern Life in Ancient Christian Orthodoxy. Frederica is a regular columnist for Beliefnet.com and a book reviewer for the Los Angeles Times. She has written hundreds of articles in secular and religious periodicals and has been interviewed extensively in national newspapers, magazines, and television programs, including the New York Times, the Chicago Tribune, Newsweek, Time magazine, CNN, MSNBC, and C-SPAN. A sought-after speaker, editor, and commentator, Frederica has worked with The Odyssey Television Network, National Public Radio's "All Things Considered," World magazine, Religion News Service, and Christianity Today, among others.

▼▲
I'm the author/artist and I want to review First Fruits of Prayer: A Forty Day Journey Through the Canon of St. Andrew - eBook.
Back
×
Back
×