Skip to main content
SPRING CYBER EVENT STARTS NOW: And it's a really BIG deal! Up to 88% off through 5/24>
From Jihad to Jesus: An Ex-Militant's Journey of Faith
By: Jerry Rassamni
Stock No: WW570917 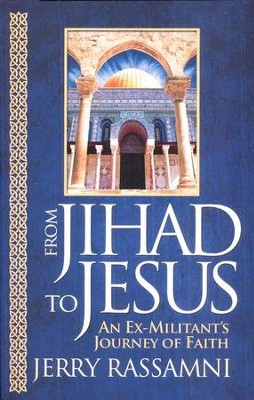 From Jihad to Jesus: An Ex-Militant's Journey of Faith

▼▲
Jerry Rassamni's story beings with his jihad (physical struggle) against Christians during the bloody Lebanese Civil War. After recounting his gripping early years, the narrative shifts to Jerry's spiritual struggle as he attempted to refute the Bible. Instead Jerry found the love and truth of Christ that led him to abandon Islam and embrace Christ as his Savior.

What caused an ex-militant Muslim who fought Christians during the Lebanese Civil War to leave his baggage of hatred behind and learn to love his enemies?

AN EX-ISLAMIC MILITANT'S JOURNEY OF FAITH

Jerry Rassamni's story begins with his "physical Jihad" (physical struggle) against Christians during the bloody Lebanese  Civil War. After recounting his gripping early years, the narrative briskly shifts to Jerry's "personal Jihad" (spiritual struggle into enlightenment) as he attempted to refute the Bible. This book reveals the gripping evidence that led Jerry to abandon Islam and embrace Christ at his Lord and Savior.

While describing his search for the truth, Jerry exposes the pagan roots of the Muslim god and the feet of clay of its founder, while providing a careful apologetic for Christianity, Jerry shares the evidence the evidence that compelled him to abandon Islam and undrapes the "Five pillars" to expose the skeletons of Islam:

* Allah, is he the eternal God of the Bible?

* The prophet Muhammad, was he a Biblical prophet?

* Abadith (Muslim customs & beliefs), are they from God?

Jerry Rassamni was born a Muslim and grew up in Lebanon during its bloody civil war. He became a militia fighter at a young age. His heart burned with hatred toward his blood enemies, the secular Christian militias. Upon examining the Scripture, Jerry was convicted of his sin and had a personal encounter with the Lord Jesus Christ. Jerry is multilingual and is a popular evangelical and apologetic speaker. He currently resides in Texas with his wife Jennifer and their three children. Visit: www.fromjihadtojesus.com

"This powerful manuscript is a potential best seller. It is meticulously researched and documented. It is a careful apologetic for evangelical Christianity, made even more potent because it is written by an ex-Muslim."

▼▲
I'm the author/artist and I want to review From Jihad to Jesus: An Ex-Militant's Journey of Faith.
Back
Back