From Hell to Glory
By: Rosanne Cutrone 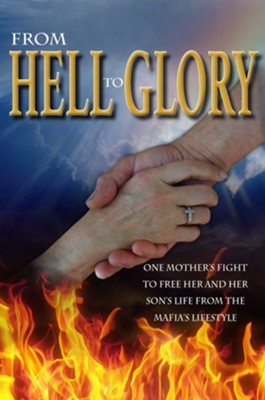 From Hell to Glory

Tell us a little about yourself.  Rosanne Cutrone grew up on the mean streets of Brooklyn, New York in the 1960s and 70s. She was raised in a rough home and equally rough neighborhood; life never seemed to be easy. From a young age, Rosanne felt a love for the underdogwhether it was animals or people, she would rescue and nurture to health either. Today she is a small business owner in Folly Beach, South Carolina. Her story of escaping the clutches of Mafia life is an amazing one. Rosannes life has been transformed by Gods grace.

What was your motivation behind this project?  This is the story of one Mothers struggle to change her life and way of thinking to make sure her son did not grow up in the same violent lifestyle she had known. She suffered from the moment of her premature birth until the age of 49, when saving grace found her. Through death, destruction and despair, she pushed forward to make sure her son would not live a life constantly exposed to danger. She wanted him to grow up without the cruel hardships she endured in the mob lifestyle. As any good mother would do, she put her own health and safety at risk for her son. Her son would never experience the things she went through as a child. The decisions she made would guarantee his world would be different from the one she had grown up in. She did not know that through these struggles, she was being helped from above. One day when she was planning to check out of this world, GOD checked into hers. The God that had always been with her became real to her and changed her life completely. He had a plan for her life all along she knew nothing about.

What do you hope folks will gain from this project?  Rosannes hope is that everyone who reads this book realizes a relationship with Jesus is easier than much of the world makes it to be. Her son has always provided her inspiration to fight on and be a better person. She knows her journey with the Lord has been amazing one.