Skip to main content
From Cyrus to Alexander: A History of the Persian Empire
By: Pierre Briant
Stock No: WW060310 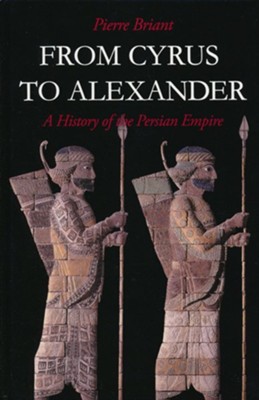 From Cyrus to Alexander: A History of the Persian Empire

By: Pierre Briant
Eisenbrauns / Hardcover
Write a Review
In Stock
This product ships free to addresses in the US!
(Just select Standard shipping at checkout.)
Stock No: WW060310
Buy Item Our Price$125.99 Retail: Save 12% ($17.41)
In Stock
Quantity:
Ships free to the US
Stock No: WW060310
Eisenbrauns / Hardcover
Quantity:
Add To Cart
of These in Your Cart

Around 550 B.C.E. the Persian people—who were previously practically unknown in the annals of history—emerged from their base in southern Iran (Fars) and engaged in a monumental adventure that, under the leadership of Cyrus the Great and his successors, culminated in the creation of an immense Empire that stretched from central Asia to Upper Egypt, from the Indus to the Danube. The Persian (or Achaemenid, named for its reigning dynasty) Empire assimilated an astonishing diversity of lands, peoples, languages, and cultures. This conquest of Near Eastern lands completely altered the history of the world: for the first time, a monolithic State as vast as the future Roman Empire arose, expanded, and matured in the course of more than two centuries (530–330) and endured until the death of Alexander the Great (323), who from a geopolitical perspective was “the last of the Achaemenids.” Even today, the remains of the Empire-the terraces, palaces, reliefs, paintings, and enameled bricks of Pasargadae, Persepolis, and Susa; the impressive royal tombs of Naqsh-i Rustam; the monumental statue of Darius the Great-serve to remind visitors of the power and unprecedented luxury of the Great Kings and their loyal courtiers (the “Faithful Ones”).

▼▲
I'm the author/artist and I want to review From Cyrus to Alexander: A History of the Persian Empire.
Back