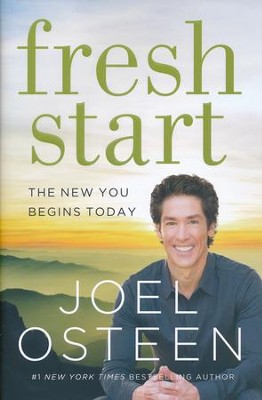 Are you longing to leave the past behind and begin again with a clean slate? Jesus---in his amazing grace---gives you that opportunity! In this encouraging guide, Osteen helps you dig into God's Word, renew your confidence, and make a fresh start. Find the courage you need to face the future---and live your best life now. Large print edition. 267 pages.

▼▲
God loves to give people fresh starts. He wants to give you a new vision for your life and your relationship with Him.
In this one-of-a-kind guide, Joel Osteen provides practical insight and encouragement to help you stay connected to God so you can receive His strength and be empowered to accomplish all that He has for you. Here are eight keys to living your life in the fullness of God's blessings and favor, help in not allowing your past to be a barrier between you and the pathway of new beginnings with God, and a treasure of insight into living by the power of God's word and His promises for your every need. In FRESH START, readers learn how to experience God's goodness and make Him a part of their everyday life.

▼▲
JOEL OSTEEN is the author of eight New York Times bestsellers. He is the senior pastor of America's largest congregation, Lakewood Church in Houston, Texas. More than 45,000 people attend services there every week. His televised messages are seen by more than 10 million viewers each week in the United States, and millions more in 100 nations around the world. His 24-hour channel on SiriusXM Satellite Radio and millions of social media followers have prompted numerous publications to name him as one of the most influential Christian leaders in the world. He resides in Houston with his wife, Victoria, and their children. You can visit his website at www.joelosteen.com.

▼▲
I'm the author/artist and I want to review Fresh Start: The New You Begins Today, hardcover.
Back
×
Back
×