Skip to main content
OUR BIGGEST BARGAIN SALE EVER: Over 6,000 deals at never-seen-before prices ~ through 8/23. Shop now >
Freedom's Light
By: Colleen Coble
Stock No: WW219385 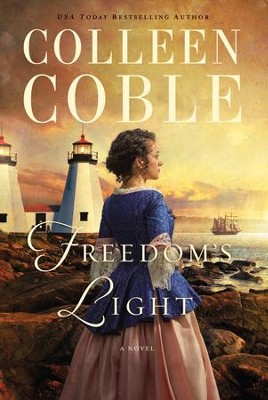 ▼▲
Hannah Thomas believes she's escaped Galen Wright's evil intentions by marrying an older lighthouse keeper. Seemingly safe in faraway Massachusetts, her world is upended when John is killed in one of the first battles of the Revolutionary War. Hannah is allowed to continue the difficult task of tending the twin lighthouses in John's place, though she faces daily disapproval from John's family. She thinks her loneliness will subside when her younger sister arrives, but she finds Lydia's dangerous obsession with Galen only escalates the dangerous tides swirling around her.A stormy night brings a shipwrecked sea captain to Hannah's door, and though he is a Tory, her heart is as traitorous as the dark-eyed captain. Even though she discovers Birch Meredith isn't the enemy he seemed at first, Hannah isn't sure their love will ever see the light of freedom.

▼▲
'This is an engrossing historical story with plenty of romance and danger for readers to get hooked by.' -- Parkersburg News and Sentinel

▼▲
I'm the author/artist and I want to review Freedom's Light.
Back