Shipment delay - click here for more details
Freedom's Pen: A Story Based on the Life of Freed Slave and Author Phillis Wheatley
By: Wendy Lawton 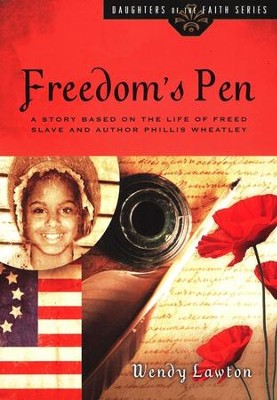 Freedom's Pen: A Story Based on the Life of Freed Slave and Author Phillis Wheatley

▼▲
Phillis Wheatley was the first published African-American poet. Captured and sold as a slave, her masters encouraged her love of learning and writing through English and Bible lessons. Only 20 when her book of poetry debuted to nationwide acclaim, this fictionalized historical biography will inspire readers with her dedication to knowledge and unwavering faith in Christ. 135 pages, softcover.

1761—Phillis Wheatley was a little girl of seven or eight years old when she was captured in Gambia and brought to America as a slave. But she didn’t let her circumstances keep her down.

She learned to read and write in English and Latin, and showed a natural gift for poetry. By the time she was twelve, her elegy at the death of the great pastor George Whitefield brought her worldwide acclaim. Phillis became known to heads of state, including George Washington himself, speaking out for American independence and the end of slavery.

She became the first African American to publish a book, and her writings would eventually win her freedom. More importantly, her poetry still proclaims Christ almost 250 years later.

Freedom’s Pen is part of the Daughters of the Faith series, which has sold more than 120,000 copies and is popular for at least two reasons. Firstly, it explores the lives of girls who made a difference while they were still young, not when they grew up, inspiring today’s young girl readers. Secondly, it recounts faith journeys. Author Lawton Wendy portrays the young girls’ struggles to make God an active part of their lives.

▼▲
Gambian native. Slave. Christian. American poet. Freewoman. Phillis Wheatley was all of these. Wendy Lawton tells her story in Freedoms Pen. Written for young girls, Freedoms Pen carries young readers from Philliss life in Gambia through her capture, her misery on the slave ship, her friendship with fellow slave Obour, her purchase by the Wheatleys, and her life there until obtaining freedom.

Philliss story begins in Africa with a slice of what her life might have been like. The authors note explains that Phillis mentioned her life in Africa only three times in her writing, so little is known of what it was actually like. The author describes enough of the slave ship environment for girls to know that it was horrid and evil without being graphic.

Lawton chronicles Philliss unusual relationship to the Wheatley family as not quite slave and not quite family, as Susannah Wheatley tries to help others realize that Africans were human by showing that they could learn if given a chance. Lawton also shows the difficult and lonely position this places Phillis in, as other slaves reject and resent her. Phillis attempts to apply Scripture such as Love your enemies and pray for them that spitefully use you (Matthew 5:44) to a fictional relationship with a hostile fellow slave.

Freedoms Pen is well-written, moving, and enjoyable. From a biblical viewpoint, it introduces young readers to a historical character who achieved great things in her short life. My nine-year-old daughter loved reading it and had me read it to her after she read it. She had no trouble with the vocabulary or with the descriptions of life on shipboard. I am considering purchasing other books in this series because of this one.  Debbie W. Wilson, www.christianbookpreviews.com

▼▲
I'm the author/artist and I want to review Freedom's Pen: A Story Based on the Life of Freed Slave and Author Phillis Wheatley.
Back
×
Back
×