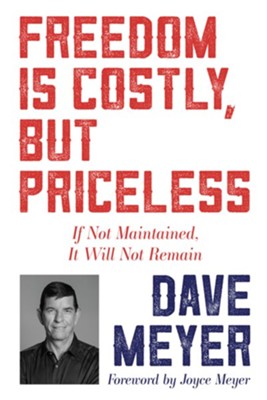 Freedom Is Costly, But Priceless: If Not Maintained, It Will Not Remain

The key to America's future begins with exploring our past. In Freedom Is Costly, But Priceless, Dave Meyer shares the importance of our nation's true history-learning about our rich, godly heritage and discovering Who and what has made this nation so great. God's Word was an integral part of our nation's founding, and His Word is still the key today to restoring our families, schools, churches and communities.

When it comes to the future of this nation, each one of us plays a greater role than we can possibly imagine. God has given us the ability to become an unquenchable force for good in our families, schools, churches and communities. We each have an indispensable part to play, and Dave Meyer outlines where to begin and how to take meaningful steps to make a positive change in government and society.

▼▲
The key to America’s future begins with exploring our past. In Freedom Is Costly, But Priceless, Dave Meyer shares the importance of our nation’s true history—learning about our rich, godly heritage and discovering Who and what has made this nation so great. God’s Word was an integral part of our nation’s founding, and His Word is still the key today to restoring our families, schools, churches and communities.

When it comes to the future of this nation, each one of us plays a greater role than we can possibly imagine. God has given us the ability to become an unquenchable force for good. We each have an indispensable part to play, and Dave Meyer outlines where to begin and how to take meaningful steps to make a positive change in government and society.

Dave has long been a stabilizing force behind the scenes, helping to support Joyce and build an organization that ministers the love and message of the gospel to millions each year. His steadfastness, patience, and obedience in waiting to hear God’s voice are a cornerstone of the ministry.

A veteran of the United States Army, Dave is also passionate about America’s godly heritage and the history behind this nation’s biblical principles. His heart is to pray for America and provide a spark that will encourage more Christians to pray, stand up for righteousness, and exercise their right to vote.

Dave has been married to Joyce for over fifty years. They have four grown children, twelve grandchildren, and two great-grandchildren. Dave and Joyce Meyer make their home in St. Louis, Missouri.

▼▲
In Freedom Is Costly, But Priceless, Dave Meyer identifies what each of us can do right now to save the nation. We have abandoned so many sound principles—not because we’ve forgotten our history, but rather because so many people today don’t even know our history. Dave shows us that America was founded as a covenant nation under God. This means that both we and God have separate roles to play. Dave identifies the simple steps we each must take in order to renew and restore that covenant. This book is for right now!
-- Founder, WallBuilders

In this brilliant book, Freedom Is Costly, But Priceless, Dave Meyer lays out godly principles that must be in place for true freedom to flourish. The book is written by a man who has studied, observed and spoken to thousands who share this core passion. Without a doubt, Dave Meyer is uniquely qualified to address this timely subject of such great importance. In a world that desires to live in freedom, this visionary book is a must read.
-- Senior pastor, Dream City Church, Phoenix, AZ

This book by Dave Meyer is so needed, inspired, and noble in purpose. It opens hearts to the work of a gracious and merciful God in the gift of liberty to American Christians. We can find much wrong in a world that threatens the things most precious to us—family, children, faith, property, and liberty. We are now called to reclaim and restore the purpose God gave America so many years ago during the founding of our civil government upon biblical truth and principles. We sense an awakening and a new resolve in the many restorative efforts across the land, and we rejoice that today the American spirit is as able as it was with Washington, John Paul Jones, and Patrick Henry. But we must also learn that the root of the word restore is "story," and the prefix re- means "return." Restoration begins by returning to "His story" of America, and then by teaching it faithfully to our children for our children’s children. As Dave Meyer exhorts us, "Christians, build your relationship with America."
-- President, Foundation for American Christian Education

Jesus told us that knowing the truth will set us free. That’s a powerful spiritual truth but it has a clear application in our lives as citizens. David Meyer lays out the truth about our nation—its godly founding and the forces that are intent on destroying that foundation. Knowing the truth about our country will encourage you to love our nation all the more and spur you to act to do your part to restore our constitutional freedoms.
-- President and CEO, Alliance Defending Freedom

Dave Meyer is a godly patriot. As Dave and I were eating lunch, he shared some of the truths you will find in this book. In that moment, I felt a strong impression from God to encourage him to put to paper those things God was revealing to him, as I believed it would encourage and embolden many believers. Consistent with the humility and nature of a man who has done so much for so many without the noticing eyes of others, he was reluctant. Yet, God persisted, so I continued to urge him. Sometimes God uses a reluctant spokesperson, like He did Moses; they don’t get in the way of what He is wanting to say—they just repeat His words. I am honored to endorse this book and I encourage you to read it, act on it, and pass it to others. I believe it will have an impact far greater and longer than any of us can foresee. I am delighted Dave obeyed God’s prompting. I pray this book blesses you along with the body of Christ across America.
-- CEO, Vision America

While describing the people of Israel, Hosea 4:6 is also a perfect description of America today: "My people are destroyed for lack of knowledge" (nkjv). My good friend Dave Meyer compellingly makes that case in his new book, Freedom Is Costly, But Priceless. As prophetic as it is patriotic, I encourage engaged believers to read his take on how we have entered into the mess we are in, but also his prescription for the way out. Dave is right: "Freedom is not an American idea. It’s God’s idea." If we hope to secure that God-given freedom for the next generation of Americans, we must contend for it.
-- President, Family Research Council

Dave Meyer understands that for a nation to be free, its citizens must be informed of the truth—including the truth of God’s hand in history—and continually work to maintain and pass on these God-given rights and liberties. If this occurs, we can have great hope for the future. But if we neglect our duties, the fires of freedom will be extinguished. In Freedom Is Costly, But Priceless, Dave clearly and succinctly presents the blueprint to follow in order to rebuild America and preserve the invaluable fruits of freedom. I believe this book will change the lives of many people and be used to help preserve the American republic.
-- President, Providence Foundation Co-author, America's Providential History

In this book, you will benefit from the more than 25 years that Dave has studied true American history. You will not only learn many things about our history, but you will know what your duties as an American are concerning the regaining and maintaining of our rights and freedoms that have been lost through a lack of knowledge and passivity. We still have time to see America change for the better, but we have no time to waste in aggressively being active in learning all we can about what can be done—and then doing it. We only have this nation because of God, and we won’t keep it without Him.
-- President, Joyce Meyer Ministries

▼▲
I'm the author/artist and I want to review Freedom Is Costly, But Priceless: If Not Maintained, It Will Not Remain.
Back
Back