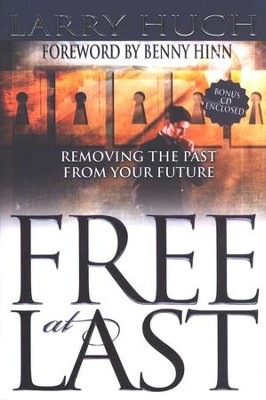 Free at Last--Book and CD

▼▲
You can break free from your past! Don't let what's happened to you and your family hold you back in life! You can find freedom from depression, anger, abuse, insecurity, and addiction in Jesus Christ. Pastor Larry Huch reveals powerful truths from Scripture that enabled him and many others to quickly break the destructive chains in their lives and receive God's blessings. Learn the secret to true freedom and you, too, can regain your joy and hope, experience divine health, mend broken relationships, and walk in true prosperity - body, soul, and spirit. A study guide and teaching sermon are included on a CD.

▼▲
Does your family history or that of a loved one have a common thread of dysfunction, marital problems, sickness, or abuse that goes from generation to generation? If so, this book is for you. There are countless ways you can be affected by the hurtful patterns that have been knowingly and unknowingly passed down through the generations. But you can break free.
Here, Pastor Larry Huch reveals powerful truths from Scripture to show you how to break generational curses and begin to receive God’s blessing in every area of your life. Learn from his powerful testimony as he shares how a family curse plagued him until he turned to Jesus Christ for healing, and find your freedom.
Does your family always seem to fall into the same sins, the same harmful actions? Do you have a history of sickness or marital problems or abuse? The past does not have to determine the course of your future. Let Larry Huch teach you about generational curses and how they affect you and your family.
Learn how to&hellip; Find your freedom!

▼▲
Larry Huch is the founder and senior pastor of DFW New Beginnings in Irving, Texas. Founded in November 2004, this nondenominational church has quickly developed into a diverse, multiethnic congregation of several thousand people. Pastor Larry and his wife, Tiz, are driven by a passionate commitment to see people succeed in every area of life. That passion, along with their enthusiasm, genuine love for people, and effective teaching, has fueled a ministry that spans over thirty years and two continents.
That same energy and commitment to sharing a positive, life-changing, and biblically based message with the world is the hallmark of Pastor Larry’s international television program, New Beginnings. This program is broadcast weekly to millions of homes around the globe and has served to touch and change the lives of countless people.
Pastor Larry’s signature combination of humor, a dynamic teaching style, and a deep understanding of the Bible have made him a much sought after guest on television programs, conferences, and various other forms of media. Pastor Larry is a pioneer in the area of breaking family curses and has been recognized the world over for his teachings on the subject, along with his best-selling book, Free at Last. His successful follow-up book, 10 Curses That Block the Blessing, is also a best seller. In 2012, Larry and Tiz collaborated on their first book together, Releasing Family Blessings. As a successful author, Pastor Larry has been honored by the testimonies of thousands upon thousands of people whose lives have been impacted and forever altered by his testimony and teachings.
Pastor Larry is wholeheartedly committed to bridging the gap between Christians and Jews and restoring the church to its Judeo-Christian roots, which motivated him to write his latest books, The Torah Blessing and Unveiling Ancient Biblical Secrets. He firmly believes in studying, understanding, and teaching the Word from a Jewish perspective. Larry was honored to have spoken at the Israeli Knesset and has received awards from the Knesset Social Welfare Lobby for his ministry’s generosity toward the needs of the Jewish people in Israel.
Pastors Larry and Tiz are the proud parents of three wonderful children (and a son-in-law and daughter-in-law), all who are active in ministry. Their three grandchildren, the "Sugars," are the loves of their lives!

▼▲
I'm the author/artist and I want to review Free at Last--Book and CD.
Back
Back