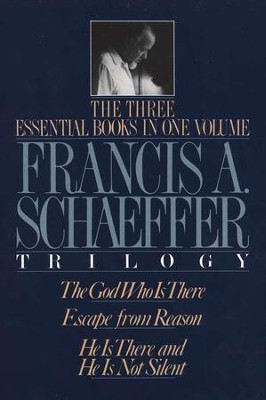 ▼▲
Few Christians have had a greater impact on our generation than Dr. Francis A. Schaeffer. Now, for the first time, three of his essential works are available in one volume---The God Who Is There, Escape from Reason, and He Is There and He Is Not Silent. Schaeffer himself considered this trio foundational to his entire life's work. This edition includes text he revised shortly before his death. 367 pages, hardcover from Crossway.

Considered foundational to his entire life's work, this text was revised shortly before the renowned theologian's death.

Lane T. Dennis (PhD, Northwestern University) is the former president and CEO of Crossway. Before joining Crossway in 1974, he served as a pastor in campus ministry at the University of Michigan (Sault Ste. Marie) and as the managing director of Verlag Grosse Freude in Switzerland. He is the author and/or editor of three books, including the Gold Medallion-award-winning book Letters of Francis A. Schaeffer, and he is the former chairman of the Evangelical Christian Publishers Association. Dennis serves as the chairman of the ESV (English Standard Version) Bible Translation Oversight Committee and as the executive editor of the ESV Study Bible. Lane and his wife, Ebeth, live in Wheaton, Illinois.

▼▲
I'm the author/artist and I want to review Francis Schaeffer Trilogy.
Back
Back