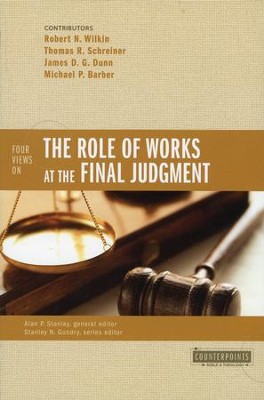 Four Views on the Role of Works at the Final Judgment

▼▲
Twenty-first century perspectives on a core doctrine and classic debate.

Four Views on the Role of Works at the Final Judgment takes up an age-old question: What must I do to be saved? Four leading scholars on the topic of the degree to which one's works will be considered at the final judgment.

Through a discussion of biblical texts, this book presents four perspectives, one from each scholar:

Through a discussion of Biblical texts, this book presents four perspectives on the role of works at the final judgment.

The final judgment is the last and final act before God dwells with his people forever. Scripture makes that clear, but what function do our actions play in the final assessment of our souls--especially those of professing Christians?

The contributors each state their case for one of four prominent views on the effect of works at the end of time:

This book allows each contributor to not only present the case for his view, but also to critique and respond to the critiques of the other contributors, allowing you to compare their beliefs in an open forum setting to see where they overlap and where they differ.

Robert Wilkin (Ph.D., Dallas Theological Seminary) was born and raised in Southern California. After graduating from college he joined the staff of Campus Crusade for Christ, serving two years each at Arkansas State University and North Carolina State University. During his seminary studies Bob served in a variety of ministries including a year each in college and high school ministry, a year as a hospital chaplain, and three years as a pastor. After receiving his doctorate, Bob taught at Woodcrest College in Lindale, Texas and then at Multnomah Bible College in Portland, Oregon.

Feeling that there was a great need for an educational and networking organization for Christians who believe in the freeness of the Gospel, Bob started Grace Evangelical Society in June of 1986. In July of 1987 he left his teaching position to devote full time to heading up this ministry. Since its inception, readership of the bimonthly newsletter, Grace In Focus, has grown from 30 to over 9,500 in 54 countries.

Dr. Wilkin has written three books, Confident in Christ, The Road to Reward, and Secure and Sure, as well as two booklets, and hundreds of newsletter and journal articles.  Bob and his wife Sharon live in Lewisville, Texas.


James Dunn (Ph.D., Cambridge) was for many years the Lightfoot Professor of Divinity in the Department of Theology at the University of Durham. Since his retirement he has been made Emeritus Lightfoot Professor. He is a leading British New Testament scholar, broadly in the Protestant tradition. Dunn is especially associated with the New Perspective on Paul, a phrase which he is credited with coining during his 1982 Manson Memorial Lecture.


Michael Barber (Ph.D., Fuller Theological Seminary) is Professor of Theology, Scripture and Catholic Thought at John Paul the Great Catholic University in San Diego, California.  His dissertation was on the Historical Jesus and Sacramental Eschatology under the world famous scholar, Colin Brown. He has an MA in Theology from Franciscan University of Steubenville and received his BA in Theology and Philosophy from Azusa Pacific University. He is the author of several books, including, Coming Soon: Unlocking the Book of Revelation and Applying Its Lessons Today (Emmaus Road, 2006) and most recently, Genesis to Jesus: Studying Scripture from the Heart of the Church (Servant, 2007), a Bible study co-authored with Kimberly Hahn. He is a Research Fellow for the St. Paul Center for Biblical Theology, founded by Dr. Scott Hahn. His weekly podcast of 'The Sacred Page with Michael Barber' is carried on many Catholic radio stations.  He lives in San Diego with his wife Kim and two young boys, Michael Patrick (Jr.) and Matthew Stephen.


Alan P. Stanley is Lecturer in Biblical Studies at Brisbane School of Theology, Brisbane Australia, since 2003. He has published two books on this and associated topics: Did Jesus Teach Salvation by Works?; Salvation is More Complicated Than You Think: Studies in the Teachings of Jesus.

▼▲
I'm the author/artist and I want to review Four Views on the Role of Works at the Final Judgment.
Back
Back