Skip to main content
SPRING CYBER EVENT STARTS NOW: And it's a really BIG deal! Up to 88% off through 5/24>
Four Views on the Historical Adam
By: Ardel Caneday, Matthew Barrett, Denis Lamoureux
Stock No: WW499275 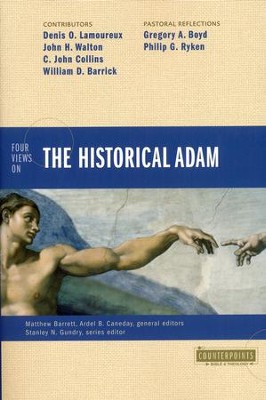 Four Views on the Historical Adam

▼▲
As a part of the Counterpoints series, Four Views on the Historical Adam clearly outlines four primary views on Adam held by evangelicals, featuring top-notch proponents of each view presenting their positions in their own words and critiquing the positions with which they disagree. You will come away with a better understanding of the key biblical and theological issues at stake and of the implications of Adam for contemporary Christian witness and church life.

Contributors include Denis O. Lamoureux, John H. Walton, C. John Collins, and William Barrick. Each focuses his essay on answering the following questions: What is the biblical case for your viewpoint, and how do you reconcile it both with modern science and with passages and potential interpretations that seem to counter it? In what ways is your view more theologically consistent and coherent than other views? What are the implications of your view for the spiritual life and public witness of the church and individual believers, and how is your view a healthier alternative for both? Concluding reflections by pastor-scholars Gregory A. Boyd and Philip Graham Ryken highlight the significance of the topic in the faith of everyday believers.

Were the biblical Adam and Eve historical figures, or are the early events described in Genesis primarily symbolic in nature?

Behind the debate of a historical Adam is the age-old debate about evolution and the agreement between Scripture and science. With an introduction that outlines the history and main points of every viewpoint from Darwinism to Young Earth Creationism, this book then clearly outlines four primary views on Adam held by evangelical Christians.

This book allows each contributor to not only present the case for his view, but also to critique and respond to the critiques of the other contributors, allowing you to compare their beliefs in an open forum setting to see where they overlap and where they differ.

Concluding reflections by pastor-scholars Gregory A. Boyd and Philip Graham Ryken highlight the significance of the topic in the faith of everyday believers.

Matthew Barrett (PhD, The Southern Baptist Theological Seminary) is associate professor of Christian theology at Midwestern Baptist Theological Seminary, as well as executive editor of Credo Magazine. He is the editor of The Five Solas Series and the author of several books, including God's Word Alone, Reformation Theology, Salvation by Grace, and Owen on the Christian Life.

Ardel Caneday (Ph.D., Trinity Evangelical Divinity School) is Professor of New Testament Studies and Biblical Studies at Northwestern College in St. Paul, Minnesota. He has served churches in various pastoral roles, including senior pastor, and authored numerous journal articles and essays in edited volumes. He is co-author with Thomas Schreiner of The Race Set Before Us: A Biblical Theology of Perseverance and Assurance.

C. John Collins (PhD, University of Liverpool) is Professor of Old Testament at Covenant Theological Seminary. Chair of the Old Testament translation committee for the English Standard Version, he is the author of Genesis 1-4: A Linguistic, Literary, and Theological Commentary; The God of Miracles: An Exegetical Examination of God’s Action in the World; Science and Faith: Friends or Foes? and Did Adam and Eve Really Exist? Who They Were and Why You Should Care.

William Barrick (ThD, Grace Theological Seminary) is Professor of Old Testament at The Master's Seminary. Previously an exegetical consultant for Bible translation projects in six languages with the Association of Baptists for World Evangelism, he has written or contributed to 24 books, including Coming to Grips with Genesis and a commentary on Genesis for Logos Bible Software. He has also written more than 120 periodical articles and book reviews.

Gregory A. Boyd (PhD, Princeton Theological Seminary) is a pastor at Woodland Hills Church in St. Paul, Minnesota. Previously a professor of theology at Bethel University, several of his many books include Letters from a Skeptic, Repenting of Religion, Myth of a Christian Nation, God at War, and Satan and the Problem of Evil.

Philip G. Ryken (PhD, University of Oxford) is president of Wheaton College in Wheaton, Illinois, and former senior minister of Tenth Presbyterian Church in Philadelphia. Several of his more than 30 books authored include Loving the Way Jesus Loves and expository commentaries on Exodus, Jeremiah, Luke, and other books of the Bible.

Denis Lamoureux is Associate Professor of Science and Religion at St. Joseph's College in the University of Alberta, the first tenure-track position in Canada dedicated to teaching and research on the relationship between scientific discovery and Christian faith. Lamoureux is the author of Evolutionary Creation: A Christian Approach to Evolution; I Love Jesus and I Accept Evolution; and Darwinism Defeated? The Johnson-Lamoureux Debate on Biological Origins.

▼▲
I'm the author/artist and I want to review Four Views on the Historical Adam.
Back
Back