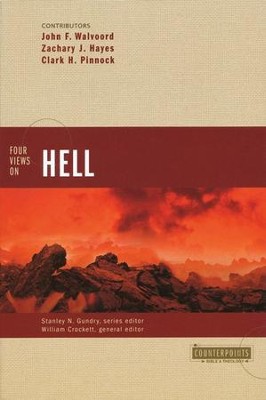 ▼▲
Is hell literally a place of eternal smoke and flames? Does God annihilate wicked souls rather than punish them endlessly? Ideal for comparing and contrasting, this forum evenhandedly presents, critiques, and defends the literal, metaphorical, conditional, and purgatorial views on hell. Contributors include John Walvoord, William Crockett, Zachary Hayes, and Clark Pinnock. 190 pages, softcover from Zondervan.

The doctrine of hell is one of the most difficult and unsavory theological topics. In Four Views on Hell, leading biblical scholars meet this subject head-on, discussing the four primary views on what the Scriptures say about divine punishment.

Is hell to be understood literally as a place of eternal smoke and flames? Or are such images simply metaphors for a real but different form of punishment? Is there such a thing as "conditional immortality," in which God annihilates the souls of the wicked rather than punishing them endlessly? Is there a Purgatory, and if so, how does it fit into the scope of biblical interpretation?

Here, scholars who affirm an inspired Bible, relevant and authoritative for every era, present models they consider most faithful to Scripture:

Each view in turn is presented, respectfully critiqued by the others, and defended. This evenhanded approach is ideal for comparing views in order to form a personal conclusion about one of Christianity’s toughest doctrines.

▼▲
I'm the author/artist and I want to review Four Views on Hell.
Back
Back