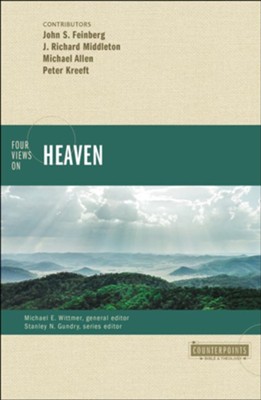 Christians from a variety of denominations and traditions are in the middle of an important conversation about the final destiny of the saved. Scholars such as N. T. Wright and J. Richard Middleton have pushed back against the traditional view of heaven, and now some Christians are pushing back against them for fear that talk about the earthiness of our final hope distracts our attention from Jesus.

In the familiar Counterpoints format, Four Views on Heaven brings together a well-rounded discussion and highlights similarities and differences of the current views on heaven. Each author presents their strongest biblical case for their position, followed by responses and a rejoinder that model a respectful tone.

Positions and contributors include:

John S. Feinberg (PhD, University of Chicago) is department chair and professor of biblical and systematic theology at Trinity Evangelical Divinity School. He is the author of Ethics for a Brave New World (with Paul D. Feinberg) and is general editor of Crossway’s Foundations of Evangelical Theology series.

J. Richard Middleton (PhD, Free University of Amsterdam) is professor of Biblical Worldview and Exegesis at Northeastern Seminary and adjunct professor of Theology at Roberts Wesleyan College, both in Rochester, New York. He authored A New Heaven and a New Earth: Reclaiming Biblical Eschatology, The Liberating Image, and coauthored the bestsellers Truth Is Stranger Than It Used to Be and The Transforming Vision.

Peter Kreeft (PhD, Fordham University) is professor of philosophy at Boston College where he has taught since 1965. A popular lecturer, he has also taught at many other colleges, seminaries and educational institutions in the eastern United States. Kreeft has written more than fifty books, including The Best Things in Life, The Journey, How to Win the Culture War, and Handbook of Christian Apologetics (with Ronald Tacelli).

Michael Wittmer is currently Professor of Systematic Theology at GRTS in Grand Rapids, MI. He is the author of Heaven Is a Place on Earth, Don’t Stop Believing, The Last Enemy, and Despite Doubt. He and his wife, Julie, live in Grand Rapids, Michigan with their three children: Avery, Landon, and Alayna.

▼▲
I'm the author/artist and I want to review Four Views on Heaven.
Back
Back