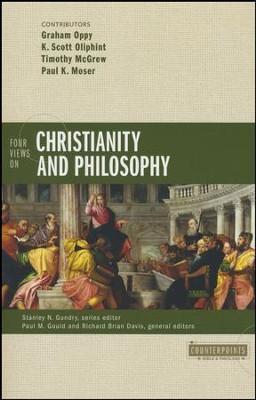 Four Views on Christianity and Philosophy

▼▲
Christianity and philosophy both claim to provide answers to the deep questions of life. But what is their true relationship to one another? In this reader-friendly resource, contributors Graham Oppy, K. Scott Oliphint, Timothy McGrew, and Paul Moser reflect on the strengths and weaknesses of each of the four predominant views---conflict, covenant, convergence, and conformation. 208 pages, softcover from Zondervan.

Philosophy and Christianity make truth claims about many of the same things. They both claim to provide answers to the deep questions of life. But how are they related to one another?

Four Views on Christianity and Philosophy introduces readers to four predominant views on the relationship between philosophy and the Christian faith and their implications for life. Each author identifies the propositional relation between philosophy and Christianity along with a section devoted to the implications for living a life devoted to the pursuit of wisdom.

General editors Paul M. Gould and Richard Davis explain the background to the discussion and provide some historical background in the introduction, as well as helpful summaries of each position in the conclusion. In the reader-friendly Counterpoints format, this book helps readers to reflect on the strengths and weaknesses of each view and draw informed conclusions in this much-debated topic.

K. Scott Oliphint is professor of apologetics and systematic theology at Westminster Theological Seminary in Philadelphia and is the author of numerous articles and books, including Reasons for Faith: Philosophy in the Service of Theology and Covenantal Apologetics. He is also coeditor of the two-volume Christian Apologetics Past and Present: A Primary Source Reader and a contributor to Four Views on Christianity and Philosophy.

Richard Brian Davis is Professor of Philosophy at Tyndale University in Toronto, Canada. He is the author or editor of four books, including Loving God with Your Mind: Essays in Honor of J. P. Moreland. He has published thirty book chapters or articles in such places as Australasian Journal of Philosophy, Religious Studies, Acta Analytica, Philo, The Modern Schoolman, Philosophia Christi, Heythrop Journal, The Journal of Medicine and Philosophy, and Axiomathes. Rich blogs at: tyndalephilosophy.com.

▼▲
I'm the author/artist and I want to review Four Views on Christianity and Philosophy.
Back
Back