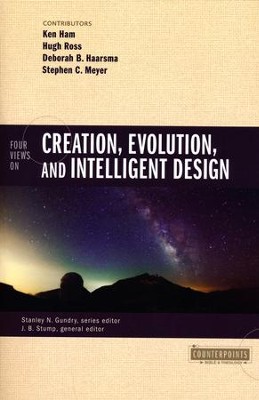 There is still a contentious debate among evangelicals on the origins of the universe and human life. Four Views on Creation, Evolution, and Intelligent Design provides the ins and outs of young earth creationism by Ken Ham; old earth (progressive) creationism by Hugh Ross; evolutionary creation by Deborah B. Haarsma; and intelligent design by Stephen C. Meyer. In the helpful Counterpoints format, they engage one another’s positions in the responses to each essay and one final rejoinder. The general editor J.B. Stump sets the stage for the discussion in the introduction and then concludes the book with final reflections and hopes for the ongoing evangelical conversation about origins.

Four Views on Creation, Evolution, and Intelligent Design presents the current "state of the conversation" about origins among evangelicals representing four key positions:

The contributors offer their best defense of their position addressing questions such as: What is your position on origins - understood broadly to include the physical universe, life, and human beings in particular? What do you take to be the most persuasive arguments in defense of your position? How do you demarcate and correlate evidence about origins from current science and from divine revelation? What hinges on answering these questions correctly?

Ken Ham is the president/CEO and founder of Answers in Genesis–US and the highly acclaimed Creation Museum. Ham is one of the most in-demand Christian speakers in North America. His emphasis is on the relevance and authority of the book of Genesis and how compromise on Genesis has opened a dangerous door regarding how modern culture and the church view biblical authority. His Australian accent, keen sense of humor, captivating stories, and exceptional PowerPoint illustrations have made him one of North America’s most effective Christian communicators.

Hugh Ross (PhD, University of Toronto) is founder and president of Reasons to Believe (www.reasons.org). He is the author of many books, including More Than a Theory, Why the Universe Is the Way It Is, and Improbable Planet. An astronomer, Ross has addressed students and faculty on over three hundred campuses in the United States and abroad on a wide variety of science-faith topics. From science conferences to churches to government labs, Ross presents powerful evidence for a purpose-filled universe. He lives in the Los Angeles area.

Deborah B. Haarsma (PhD, MIT) has served as the President of BioLogos since 2013. Previously, she served as professor and chair in the Department of Physics and Astronomy at Calvin College in Grand Rapids, Michigan. Haarsma is an experienced research scientist, with several publications in the Astrophysical Journal and the Astronomical Journal on extragalactic astronomy and cosmology. She is co-author (with her husband Loren Haarsma) of Origins: Christian Perspectives on Creation, Evolution, and Intelligent Design and co-editor (with Rev. Scott Hoezee) of Delight in Creation: Scientists Share Their Work with the Church. Gifted in interpreting complex scientific topics for lay audiences, Haarsma often speaks to churches, colleges, and schools about the relationships between science and Christian faith.

Stephen C. Meyer received his Ph.D. in the philosophy of science from the University of Cambridge. A former geophysicist and college professor, he now directs Discovery Institute’s Center for Science and Culture in Seattle. He has authored the New York Times best seller Darwin’s Doubt: The Explosive Origin of Animal Life and the Case for Intelligent Design (HarperOne, 2013) as well as Signature in the Cell: DNA and the Evidence for Intelligent Design (HarperOne, 2009), which was named a Book of the Year by the Times (of London) Literary Supplement in 2009.

J. B. Stump (PhD, Boston University) is Senior Editor at BioLogos where he oversees the development of new content and curates existing content for the website and print materials. He has authored Science and Christianity: An Introduction to the Issues (Wiley-Blackwell, forthcoming) and co-authored (with Chad Meister) Christian Thought: A Historical Introduction (Routledge, 2010). He has co-edited (with Alan Padgett) The Blackell Companion to Science and Christianity (Wiley-Blackwell, 2012) and (with Kathryn Applegate) How I Changed My Mind About Evolution (Intervarsity, forthcoming).

▼▲
I'm the author/artist and I want to review Four Views on Creation, Evolution, and Intelligent Design.
Back
×
Back
×