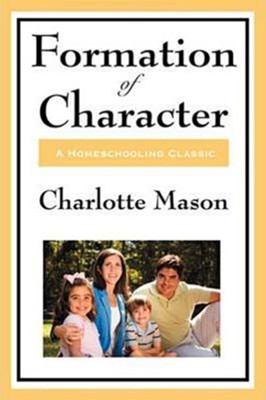 By: Charlotte Mason
More in Charlotte Mason's Original Homeschooling Series
Wilder Publications / 2008 / Paperback
Write a Review
Expected to ship on or about 08/01/20.
Stock No: WW594340

Formation of Character is the fifth volume of Charlotte Mason's Homeschooling series. The chapters stand alone and are valuable to parents of children of all ages. Part I includes case studies of children (and adults) who cured themselves of bad habits. Part II is a series of reflections on subjects including both schooling and vacations (or "stay-cations" as we now call them). Part III covers various aspects of home schooling, with a special section detailing the things that Charlotte Mason thought were important to teach to girls in particular. Part IV consists of examples of how education affected outcome of character in famous writers of her day.

Charlotte Mason was a late 19th Century educator who believed that children were persons worthy of respect, that it was better to give children "living books" and important ideas than dry facts. Emphasizing wonder and curiosity alongside reflection upon art, music, poetry, and nature, her gentle style of education has been adapted by today's homeschoolers as a method for developing a love of learning in children.

▼▲
I'm the author/artist and I want to review Formation of Character: Volume V of Charlotte Mason's Homeschooling Series.
Back
×