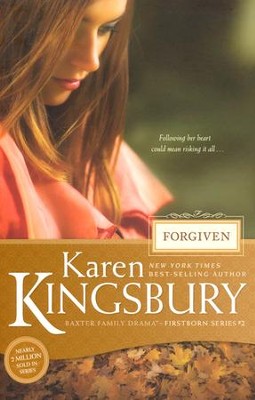 ▼▲
A-list Hollywood actor Dayne Matthews wrestles with the shocking information he learned about his past in Karen Kingbury's best-selling novel Reunion. Now Dayne must come to terms with the reality of his situation and find both forgiveness and family along the way.

▼▲
Book 2 in the 5-book Christian fiction series that has sold over 1.5 million copies

A story of God’s divine leading and the realization that peace comes only after forgiveness, from Karen Kingsbury, the #1 New York Times bestselling author of “heart-tugging and emotional” (Romantic Times) life-changing fiction.

A Deadly Accident
The Christian Kids Theater group is devastated by a tragedy greater than any of them could’ve imagined. Now their director, Katy Hart, must find a way to walk the kids through their grief and give them a reason to believe again. But will hatred and revenge have the final word?

An Aching Emptiness
Dayne Matthews is working on what could be his best movie yet. Still, he feels empty and unfocused, aching for real love and the family he’ll never know. Then a friend tells him about a teaching center and a way to become like God. Is this the answer Dayne’s been searching for?

A Shocking Discovery
John Baxter reconnects with an old friend and shares a buried secret, one that he and his wife kept hidden all their married lives. Now—in his wife’s honor—he decides to continue a very special search. But in the process he makes a critical mistake and one of his daughters stumbles onto a letter she was never supposed to see. For the Baxters, grace and redemption will play a greater role in this season than ever before.

The Firstborn series is the second installment in the continuing Baxter Family Drama from America’s number one inspirational novelist, Karen Kingsbury. Revisit the Baxter family in all their life-changing events, or share the series with someone who hasn’t discovered it yet.

▼▲
I'm the author/artist and I want to review Forgiven, Firstborn Series #2.
Back
×
Back
×