Skip to main content
NEW CYBER DEALS: Over 2,500 deals site wide thru 12/13 — shop now >
Forever in Love with Jesus Workbook: Becoming One with the Love of Your Life - eBook
By: Dee Brestin, Kathy Troccoli
Stock No: WW17314EB 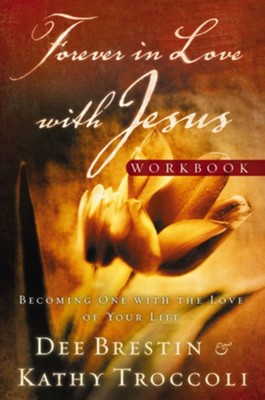 Forever in Love with Jesus Workbook: Becoming One with the Love of Your Life - eBook

▼▲
From the authors of Forever in Love with Jesus comes a companion study guide to help you keep your heart's fire burning. In 10 refreshing interactive lessons, Brestin and Troccoli help you understand Jesus as the Bridegroom, the Bread of Life, the Lion of Judah and more. Includes questions for individual or group study.

▼▲
Fall more deeply in love with Jesus and be transformed into the woman you long to be by spending thirty minutes a day with Him and the Forever in Love with Jesus Workbook. The workbook contains ten lessons, each divided into five days. Remarkable paintings, elightening discussions, related movie selections, and interactive questions will draw you ever closer to Jesus – the Love of your life . . . and beyond.

▼▲
Kathy Troccoli is an award-winning singer, author and speaker who has sold more than 1.5 million albums, garnered numerous number 1 radio hits, received two Dove Awards and a recent Grammy® nomination with her rich, melodic voice. Whether singing or speaking, Kathy is driven by a passionate desire to share Christ and the hope that comes from knowing Him. She is the author of several books and Bible studies and is a sought-after conference speaker. In 2003, Kathy was selected by the readers of Today's Christian Woman magazine as one of the four most influential women in America.


Dee Brestin (www.deebrestin.com) is a writer, speaker, and teacher. Her book The Friendships of Women has sold over a million copies and was recently released in a 20th Anniversary Edition. Falling in Love with Jesus has sold over 400,000 copies. Dee has written twenty Bible studies, the first of which, Proverbs and Parables, has been in print for over thirty years. She is a frequent guest on Moody Radio (Mid-day Connection) and Focus on the Family; she also speaks to many large women’s conferences yearly. A graduate of Northwestern University, Dee has studied with Covenant Seminary. She is the mother of five grown children and lives in Wisconsin and Missouri.

▼▲
I'm the author/artist and I want to review Forever in Love with Jesus Workbook: Becoming One with the Love of Your Life - eBook.
Back
Back