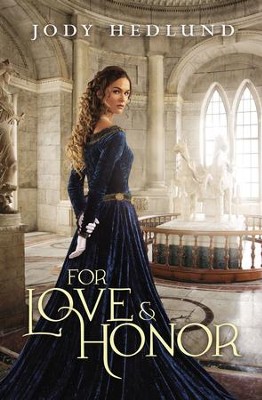 ▼▲
Lady Sabine is beautiful---but she's hiding a blemish that could brand her as a witch. What man would want a woman so flawed? Deeply in debt, Sir Bennet's only chance to repay his creditors is to marry into wealth. Thrust together by circumstances, the couple enters into an agreement. But will their secrets destroy their love? 256 pages, softcover from Zondervan.

A wealthy noblewoman. A desperate knight. A dangerous secret that threatens their love &hellip; and their lives. If you’re looking for a good, clean read that combines the setting and mood of a medieval fairytale with the heat of historical romance—you found it!

Lady Sabine is harboring a skin blemish that, if revealed, could cause her to be branded as a witch, put her life in danger, and damage her chances of making a good marriage. No nobleman would want to marry a woman so flawed &hellip; and a possible witch at that.

Sir Bennet is returning home to protect his family from an imminent attack by neighboring lords who seek repayment of debts. Without fortune or means to pay those debts, Sir Bennet realizes his only option is to make a marriage match with a wealthy noblewoman. As a man of honor, he loathes the idea of courting a woman for her money, but with time running out for his family’s safety, what other choice does he have?

As Lady Sabine and Sir Bennet are thrust together under dangerous circumstances, will they both be able to learn to trust each other enough to share their deepest secrets? Or will those secrets ultimately lead to their demise?

"A great selection for collections looking for titles with strong Christian themes or for readers who enjoy fairy tales." —School Library Journal

For Love and Honor:

▼▲
Award-winning historical fiction author Jody Hedlund presents the third book in her trio of related medieval young adult novels. For Love and Honor gives a nod to Beauty and the Beast. In For Love and Honor, Lady Sabine is a young noblewoman. Although she is beautiful and wealthy, she has a physical flaw that could prevent her from making a good marriage as well as endanger her life due to 14th century superstitions. Meanwhile, Sir Bennet is called home to rescue his family from financial ruin. His brother has incurred a debt that cannot be easily repaid. The only recourse is to marry a wealthy noblewoman, but Bennet doesn’t want to marry just for that. Sabine travels to Bennet’s home, thinking she is purchasing some valuable art and unaware that her grandmother has her own plan. When Bennet’s home is attacked while Lady Sabine is there, they are forced to trust one another. Will they build a relationship based on love and honor? What will happen when Sabine’s blemish is revealed and she is called a witch? Written from a dual viewpoint, the book employs two different fonts. Hedlund excels at showing how others judge by external appearances while God judges by the inward beauty. The spiritual element is evident but not heavy-handed. Filled with descriptive narrative and endearing characters, For Love and Honor is an entertaining read–except for the necessary violence in the fighting scenes and Sabine’s imprisonment. Its believable plot has enough twists to keep the reader engaged. Fans of Lisa Bergren’s River of Time series, Dina Sleiman’s Valiant Hearts series, and Melanie Dickerson’s medieval young adult books will also enjoy Hedlund’s medieval stories. Recommended for teen collections in public libraries and school libraries. Carol R. Gehringer -- Christian Library Journal

It is April 1391, and 20-year-old Sir Bennet has been called home to Maidstone Castle, Hampton, to save the family from inevitable attack and financial ruin. The options are minimal at best: sell off the family heirlooms and property or marry into a wealthy family. Sir Bennet, a man of honor, is sickened by the thought of marrying for financial gain instead of for love. Still, he agrees to meet wealthy 17-year-old Lady Sabine, who believes that she will be visiting Maidstone to purchase art from the family’s massive collection. Sir Bennet works diligently to win her heart, and she gradually falls for his attention, but she is keeping secrets of her own: she has a birthmark on her forearm that has prevented her from developing relationships with others. In fact, on the way to Maidstone, Lady Sabine and her grandmother are stopped by bandits, and in an attempt to repel the attackers, Lady Sabine reveals the mark and claims to be a witch. This choice returns to haunt her and almost costs her her life. Eventually, Sir Bennet and Lady Sabine must decide if the feelings they have developed for each other are true love and if they can ever truly trust each other once their secrets have been exposed. Told in alternating chapters of first-person narration, this evocative “will-he-won’t-he-will-she-won’t-she” historical romance will tease readers straight through to the heart-stopping ending. VERDICT Recommended for fans of Melanie Dickerson’s titles, this will make a solid addition to any YA romance collection.–Susan Harris, Ridgeway High School, TN -- School Library Journal

▼▲
I'm the author/artist and I want to review For Love & Honor.
Back