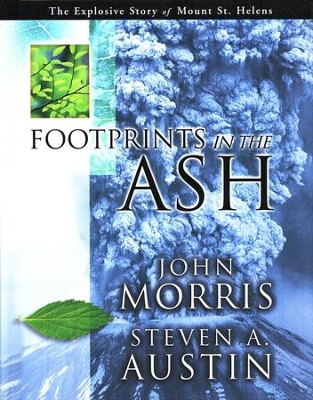 Footprints in the Ash The Explosive Story of Mount St. Helens

▼▲
The violent eruption of Mount St. Helens in 1980 touched off a cascade of geologic processes that quickly reshaped the surrounding landscape. Did the catastrophic explosion reveal new information about Earth's age? Morris and Austin explore this intriguing question, comparing the results of the volcanic event with those of the Great Flood. A masterful discussion that turns the "old Earth" theory on its head! 125 pages, hardcover from Master Books.

▼▲
In the aftermath of the Mount St. Helens eruption and the subsequent glacier slide and mudflows, there remained a geologic gold mine for earth scientists. No natural disasters in recent history could compare with the variety of process which resulted from this tectonic and volcanic event. As creation scientists have carefully studied this geological phenomenon, they have concluded that Mount St. Helens accomplished the same sort of geologic work that biblical creationists attribute to Noah's flood. While this explosion was certainly much smaller in scale and intensity, many lessons were learned through this occurrence that help us understand the unobservable past. Journey back to this catastrophic event with scientists Dr. Steve Austin and Dr. John Morris and see what was discovered as they reconstruct the sequence of earthquakes, eruptions, avalanches, mudflows, and other geologic processes and unveil their fascinating research findings

▼▲
I'm the author/artist and I want to review Footprints in the Ash The Explosive Story of Mount St. Helens.
Back