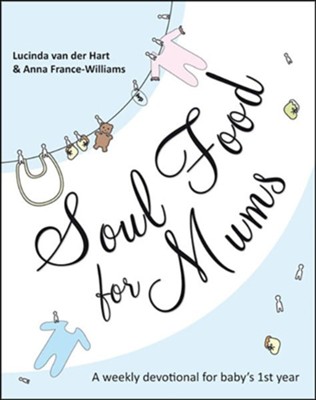 You are too exhausted to think, never mind pray. Your home is a mess and you can't find your Bible. Soul Food for Mums will nourish you through your baby's first year, offering inspirational and practical ideas for applying God's word and incorporating prayer into your daily life. It won't make you feel guilty about the time or energy you simply don't have. With honesty and humor, the authors draw upon their own and others' experiences of motherhood. The result is both delightful and unusual, filled with succinct, accessible, weekly biblical reflections. It's a lifeline for every mother with a new baby.

Lucinda van der Hart is a freelance journalist in Harrow, London. She is married to Will, a vicar, and they have two children. Will and Lucinda are authors of The Pregnancy Book: Spiritual and Emotional Survival for First-time Parents.


Anna France-Williams has worked in media and publice relations. She is part of the leadership team at St Francis Community Church in west London, where her husband, Azariah, is the leader. They have a daughter.


Amy Orr-Ewing is the UK Director for RZIM Europe and Curriculum Director for the Oxford Centre for Christian Apologetics. She gained a first class degree in Theology at Christ Church, Oxford University before receiving a Masters degree in Theology at King's College, London. Amy has written a number of books, including two that explore key questions in apologetics: Is the Bible Intolerant? which was shortlisted for the 2006 UK Christian Book Awards, and Is Believing in God Irrational? Her most recent publication is Millenials, which was co-written with her husband Frog in 2010. Amy is also now a regular columnist for Christianity magazine. Amy speaks and lectures on Christian apologetics worldwide, at events such as Keswick Convention, New Wine and the European Leadership Forum, Hungary. Amy lives in Buckinghamshire with her husband Frog and their three boys where they have recently planted a new church called the Latimer Minster.

▼▲
I'm the author/artist and I want to review Soul Food for Mums: A Weekly Devotional for Baby's 1st Year.
Back