Flights of Fancy #1
By: Jen Turano 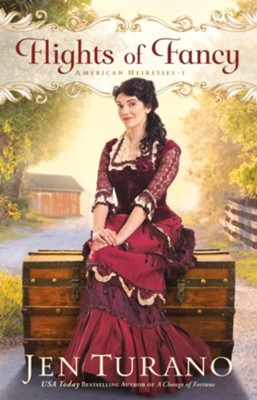 Miss Isadora Delafield may be an heiress, but her life is far from carefree. When her mother begins pressuring her to marry an elderly and uncouth duke, she escapes from the high society world she's always known and finds herself to be an unlikely candidate for a housekeeper position in rural Pennsylvania.

Mr. Ian MacKenzie is known for his savvy business sense and has built his reputation and fortune completely on his own merits. But when his adopted parents are in need of a new housekeeper and Isadora is thrown into his path, he's unexpectedly charmed by her unconventional manner.

Neither Isadora nor Ian expected to find the other so intriguing, but when mysterious incidents on the farm and the truth of Isadora's secret threaten those they love, they'll have to set aside everything they thought they wanted for a chance at happy-ever-after.

▼▲
Jen Turano is the USA Today bestselling author of eleven novels and two novellas. She is a member of ACFW and RWA and lives in a suburb of Denver, Colorado. Visit her website at www.jenturano.com.