My Flesh is Meat Indeed: A Nonsacramental Reading of John 6:51-58
By: Meredith J.C. Warren 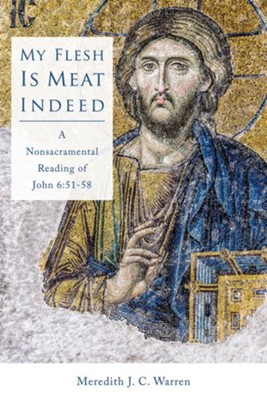 My Flesh is Meat Indeed: A Nonsacramental Reading of John 6:51-58

Readers have long puzzled over the absence from the Johannine “Last Supper” of any words by Jesus over bread and wine - suggesting to some that John is indifferent or even hostile to sacramental thought or action - and the apparent dislocation to the feeding miracle, in John 6, of Jesus’ declaration that believers must eat his flesh. Meredith J. C. Warren argues that in fact, the “bread of life” discourse in John 6:51c-58 does not bear any Eucharistic overtones. Rather, John plays on shared cultural expectations in the ancient Mediterranean world about the nature of heroic sacrifice and the accompanying sacrificial meal, which established the identification of a hero with a deity.
From Homer and continuing through Greek romances like Chaereas and Callirhoe, An Ephesian Tale, Leucippe and Clitophon, and An Ethiopian Story, Warren traces a literary trope in which a hero or heroine’s antagonistic relationship with a deity is resolved through the sacrifice of the hero. She argues that seen against this milieu, Jesus’ insistence that his flesh be eaten serves to demonstrate his identity and confirms the Christology of the rest of the Gospel.

▼▲
I'm the author/artist and I want to review My Flesh is Meat Indeed: A Nonsacramental Reading of John 6:51-58.
Back
×