Flame in the Night: A Novel of World War II France - eBook
By: Heather Munn 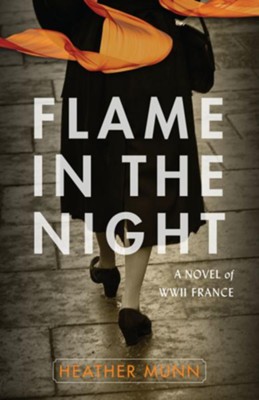 Flame in the Night: A Novel of World War II France - eBook

▼▲
In occupied France, a teen is torn between hate and love
Julien Losier has just turned eighteen. But this is Vichy France in 1942, and his coming of age is marred by the Nazi occupation of his homeland. His father has always taught him that evil is resisted by the power of God, not by the gun. But when the roundups of Jews begin and both his best friend and the girl he's falling for become targets, Julien must question where real power lies. Can he be a man who protects the people he loves if he follows his father's ways of peace?

His hometown is a fragile fortress where hundreds of Jewish youth hide in plain sight, protected only by the goodwill of their neighbors. Julien takes part in the intricate system of sentries and alert codes that keep them safe, doing what he can to resist the Nazis. As the Germans close in, he can see the moment coming when all the town's careful defenses will fail. He's torn between the faith of his father and his increasing surety that fighting violence with violence is the only way to win. How can the meek inherit the earth when the strong hold all the cards?

Now the young Jewish woman who has captured his heart comes under deadly threat, and there are no good choices. But for Elise, there's nothing Julien won't risk.

Based on actual events in Vichy France, Flame in the Night is a powerful examination of the strength of faith and peaceful resistance in the face of overwhelming odds.

▼▲
I'm the author/artist and I want to review Flame in the Night: A Novel of World War II France - eBook.
Back
×
Back
×