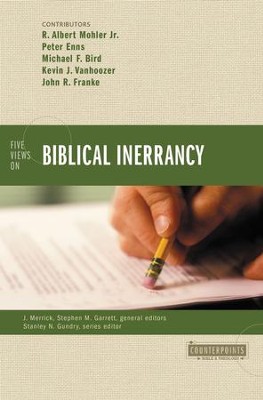 ▼▲
There is little doubt that the inerrancy of the Bible is a current and often contentious topic among evangelicals. Five Views on Biblical Inerrancy represents a timely contribution by showcasing the spectrum of evangelical positions on inerrancy, facilitating understanding of these perspectives, particularly where and why they diverge.

Each essay in Five Views on Biblical Inerrancy considers: the present context and the viability and relevance for the contemporary evangelical Christian witness; whether and to what extent Scripture teaches its own inerrancy; the position's assumed/implied understandings of the nature of Scripture, God, and truth; and three difficult biblical texts, one that concerns intra-canonical contradictions, one that raises questions of theological plurality, and one that concerns historicity. Five Views on Biblical Inerrancy serves not only as a single-volume resource for surveying the current debate, but also as a catalyst both for understanding and advancing the conversation further. Contributors include Al Mohler, Kevin Vanhoozer, Michael Bird, Peter Enns, and John Franke.

The inerrancy of the Bible--the belief that the Bible is without error--is often a contentious topic among mainstream Christianity.

Like other titles in the Counterpoints collection, this volume gives those interested in theology the tools they need to draw informed conclusions on debated issues by showcasing the range of positions in a way that helps readers understand the perspectives--especially where and why they diverge.

Each essay in Five Views on Biblical Inerrancy considers:

Five Views on Biblical Inerrancy serves not only as a single-volume resource for surveying the current debate, but also as a catalyst both for understanding and advancing the conversation further. Contributors include Al Mohler, Kevin Vanhoozer, Michael Bird, Peter Enns, and John Franke.

R. Albert Mohler Jr. has been called "one of America's most influential evangelicals" (Economist) and the "reigning intellectual of the evangelical movement" (Time.com). The president of the Southern Baptist Theological Seminary, he writes a popular blog and a regular commentary, available at AlbertMohler.com, and hosts two podcasts: The Briefing and Thinking in Public. He is the author of many books, including We Cannot Be Silent and The Prayer that Turns the World Upside Down, and has appeared in the New York Times, the Wall Street Journal, USA Today, and on programs such as NBC's Today, ABC's Good Morning America, and PBS NewsHour with Jim Lehrer. He and his wife, Mary, live in Louisville, Kentucky.

Dr. Peter Enns (PhD. Harvard University) is a biblical scholar and teaches at Eastern University. He is author of several books including Exodus (NIV Application Commentary), Inspiration and Incarnation: Evangelicals and the Problem of the Old Testament, and The Evolution of Adam: What the Bible Does and Doesn't Say about Human Origins.

Michael F. Bird is Academic Dean and lecturer in theology at Ridley College in Melbourne, Australia. He is the author of Jesus and the Origins of the Gentile Mission, The Saving Righteousness of God, Evangelical Theology, Romans (Story of God Bible Commentary Series), The Gospel of the Lord: How the Early Church Wrote the Story of Jesus, and editor of The Apostle Paul: Four Views. He also runs a popular theological studies blog called "Euangelion" and can be followed on twitter @mbird12.

Kevin J. Vanhoozer (PhD, Cambridge University, England) is Research Professor of Systematic Theology at Trinity Evangelical Divinity School in Deerfield, Illinois. He is author of several books, including Is There a Meaning in This Text? The Bible, the Reader, and the Morality of Literary Knowledge, The Drama of Doctrine: A Canonical-Linguistic Approach to Christian Theology, and Faith Speaking Understanding: Performing the Drama of Doctrine. He also serves on the editorial board of the International Journal of Systematic Theology and the Journal of Theological Interpretation.

John R. Franke (DPhil, Oxford) serves full-time as Theologian in Residence with Second Presbyterian Church of Indianapolis. He is also Professor of Religious Studies and Missiology for the Protestant Theological Faculty of Leuven, Belgium, and the General Coordinator for the Gospel and Our Culture Network, North America.

Stephen M. Garrett (PhD, Trinity Evangelical Divinity School) is an associate professor of Public Theology and the Philosophy of Religion in the Social Communications Institute at Lithuania University of Educational Sciences and serves as an Academic Fellow with Cooperative Studies. He is the author of God’s Beauty-in-Act: Participating in God’s Suffering Glory.

▼▲
I'm the author/artist and I want to review Five Views on Biblical Inerrancy.
Back
Back