Shipment delay - click here for more details
Fit for the Kingdom
By: Michael B. Smith 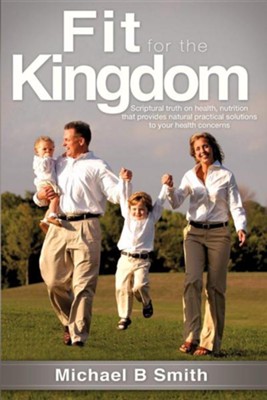 Fit for the Kingdom

▼▲
About Michael When people describe Michael Smith, you will hear words like; motivator, entrepreneur, fitness guru, bodybuilding, counselor, visionary, warrior, hero, comedian, trusted confidante, and faithful friend. But most of all, Michael Smith is an anointed man of God, with a heart for those who need healing, improved health or desire to live victorious lives according to scripture. Michael began his coaching and training career in 1974, coaching a swimming team to its first state championships. Just a few years later, Michael coached a Golden Gloves boxing team with three state champions, including his own state title. In a few personal tragedies that netted him several hundred stitches and scores of broken bones, most wrote Michael off as a 'has been,' never to be again. It was at this point that the Lord 'called' Michael to "get my people fit " In 1988 Michael shocked them all when the readers of Rocky Mountain Sport Fitness Magazine voted him the Male Aerobics Instructor of 1988 The following year topped himself when he won the Masters Division in the USA Natural Bodybuilding Championships. To prove that is wasn't a fluke victory, three months later Michael won the Natural America Masters Bodybuilding overall title Diversifying his experience, Michael then moved to the physical therapy community, helping others rehabilitate injuries to the knees, shoulders, and back. It was at this point that Michael dropped everything to attend the Heritage Christian Center, School of Ministry in Denver, Colorado under the direction of Bishop Dennis Leonard, where he graduated in 1996. Michael is currently a personal trainer at the University of Denver where he has trained 2008 Mr. Olympia third place finisher Phillip Heath, multiple national titlist, and two-time Olympic medal winner in figure skating, Michelle Kwan, and 2008 Beijing Olympic all-round gymnast, Jessica Lopez.

▼▲
I'm the author/artist and I want to review Fit for the Kingdom.
Back
×