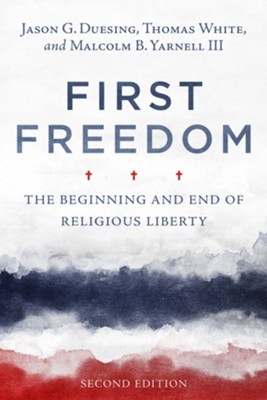 First Freedom: The Beginning and End of Religious Liberty

Challenges to religious liberty are increasingly common today as historical Christianity comes into conflict with a new, secular orthodoxy. In a thoroughly revised second edition of First Freedom: The Beginning and End of Religious Liberty, leading evangelical scholars, Jason Duesing, Thomas White, and Malcolm Yarnell II provide readers with an introductory glimpse at the biblical and historical foundations of religious liberty, as well as at several instances of its contemporary expression and defense. This collection of essays addresses such pressing topics as:

The editors of this revised second edition of First Freedom have sought to accumulate a fresh collection of essays from current Baptist authors of note for the purpose of equipping churches, pastors, and Christian citizens to uphold this "first freedom" given by God and defended by Christians throughout our nation's history.

Thomas White is the president of Cedarville University in Cedarville, OH.

"It is difficult to exaggerate the historical importance of the Baptist witness to religious liberty&hellip;The spiritual ancestors of the contributors to the volume would be as proud of them as I am grateful to them for placing their impressive intellectual gifts at the service of our first freedom."
—Robert P. George, McCormick Professor of Jurisprudence, Princeton University

"This book is an excellent resource for believers to be informed about religious liberty so they can take their place in helping to defend it both now and for future generations."
—Erik W. Stanley, senior counsel and director of the Center for Christian Ministries, Alliance Defending Freedom

▼▲
I'm the author/artist and I want to review First Freedom: The Beginning and End of Religious Liberty.
Back
×
Back
×