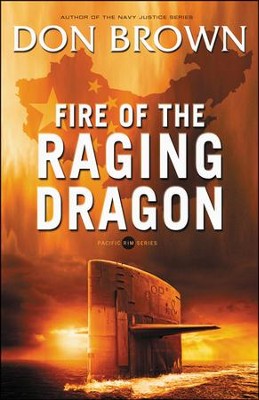 ▼▲
Stephanie Surber is stationed on board a submarine tender in the South China Sea when a naval war breaks out. After a gruesome discovery escalates America's involvement, Stephanie's father, U.S. President Douglas Surber, must choose to take a stand against evil . or save the life of his daughter.

In the very near future, China, now the world’s largest industrial producer and consumer of Mideast Oil, passes a law that all new cars manufactured in that nation will be operated on natural gas. Beneath the floor of the South China Sea, around the contested Spratly Islands, billions of gallons of natural gas wait to be mined. But at the center of the Spratlys, the remote but strategic island of Itu Aba is occupied by China’s historic enemy, Taiwan.

Aboard the submarine tender U.S.S. Emory S. Land, one of the first ships in the naval war zone, is Ensign Stephanie Surber, a recent Naval Academy graduate who is also the First Daughter of the United States. As the Emory S. Land steams into harm’s way, Ensign Surber’s life is gravely threatened. The President must make a decision. Will he take a stand against evil? Or will he save the life of his daughter?

▼▲
Fire of the Raging Dragon, the second book in Don Brown's Pacific Rim series, opens with an attack on Taiwanese territory by the People's Republic of China, lighting the fuse of war. Douglas Surber, president of the United States, sends in the Navy to keep the peace. His daughter, Ensign Stephanie Surber, is stationed in the area. In the confusion, the Taiwanese discover evidence of China's crimes against children and present it to the U.S. Navy. Can the United States confront the Chinese without antagonizing their erratic leader? Will President Surber enter a war that would place his only child and hundreds of other U.S. military personnel in danger?

Don Brown knows how to spin an enthralling plot, with the crisis coming from Psalm 41:1: "Blessed are those who have regard for the weak; the Lord delivers them in times of trouble." Mounting tension and point of view shifts make his novel impossible to put down. The wide cast of characters from all sides of the conflict offer a variety of perspectives. One scene that had me biting my nails is a standoff between Taiwanese and American naval ships. Both captains are considering whether or not to fire upon the other. The tension is maddening. Brown's only faults are his wordiness and the unrealistic dialogue between Chinese characters.

In this book, multiple main characters follow multiple subplots. The most notable are those of President Surber, Ensign Stephanie Surber, and Lieutenant Commander Gunner McCormick. President Surber walks a line between familial love, his belief in God's justice, and duty to country as war explodes in the Pacific Rim. Stephanie Surber clings to her faith, even when her ship is attacked. Gunner McCormick comes to terms with God after his helicopter crashes in open water. This and more takes place as China and Taiwan slug it out, and a ship bearing gruesome cargo becomes the focal point of escalating tension between China and the United States.

Several characters in this book are devout believers and ask for God's guidance on a regular basis. Characters exhibit a strong love of country and a desire to see justice done when the weak are exploited. The United States Navy is given the recognition it deserves, and even "enemy" sailors and pilots are portrayed as relatable human beings.

Fire of the Raging Dragon is a thrilling and heart-wrenching military tale written from a Christian point of view without preaching. I recommend Don Brown's book to all lovers of military suspense. - Becky Farb, www.ChristianBookPreviews.com

▼▲
In the not-too-distant future, the new Chinese president decides that all cars manufactured there will run on natural gas, not oil. To make that a reality, he orders a naval attack on Itu Aba, an island occupied by U.S. ally Taiwan, under which lies untouched natural gas. The U.S. president orders the Seventh Fleet to do whatever it can to stop the fight. One of the first ships to respond is the U.S.S. Emory S. Land. On board is Stephanie Surber, a recent graduate of the Naval Academy and the first daughter. When her ship is put in harm’s way, the president must decide which is more important, defending Itu Aba or saving his daughter’s life. VERDICT: With strong character development and steadily building tension, Brown’s second fast-paced series entry (after Thunder in the Morning Calm) should appeal to readers who enjoy Joel C. Rosenberg’s thrillers.

▼▲
I'm the author/artist and I want to review Fire of the Raging Dragon, Pacific Rim Series #2.
Back
×
Back
×