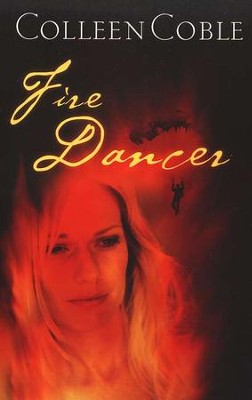 ▼▲
Volunteer firefighter and archeologist Tess Masterson loves nothing better than to be roaming Zane Grey territory in the Mogollon Rim area of northeastern Arizona. When a serial arsonist sets a fire that kills a ranch hand and nearly takes the life of her beloved horse, Casper, Tess enlists the aid of her firefighter friend Boone Carter. Together, they must find out who is behind the fires before more land and lives are destroyed.

▼▲
On her fifteenth birthday, Tess Masterson witnesses her parents' and uncle's deaths in a barn fire. She's been fighting fires as a smoke jumper in Arizona ever since. Fire Dancer tells Tess's story in Colleen Coble's news series, Smoke Jumpers.
Tess's partner, Allie Stinson, apologizes just before they jump into a fire for picking up Tess's parachute by mistake. When Allie's chute doesn't open, Tess is able to dive to Allie and rescue her. As they plummet toward the ground, Allie screams something about seeing someone messing with Allie's chute. Though Tess's chute saves their lives, Allie ends up in a coma. Tess faces the question why someone would want to kill her.
To make matters worse, Tess's sister, Stevie, pleads for Tess to return to the ranch which is near the fire camp where she's based. She hasn't been in her childhood home since her parents' deaths and the first person she meets is the attractive cowboy and former foster brother, Chase Huston. She and Chase have been enemies since her father welcomed Chase onto the ranch and into his heart as a son.
Criticized by the family for running away, Tess finds that she can't run away now because Stevie's lupus has left her severely sick and the ranch is nearly bankrupt from strange fires, vandalism, and a huge terrifying wolf. The sheriff intends to reopen the investigation into the Masterson barn fire because it resembles other fires that have gone on throughout the area over the years, but Stevie begs Tess to stop the sheriff.
As Tess begins her investigation, she finds that people in the area do not want to help her uncover the past, but without the past, she is sure she cannot solve the present. Chase Huston, who loves the ranch and the family as much as she does, agrees to become her ally.
With Colleen Coble's customary flair for twists and turns, she takes us into the world of the smoke jumper and into the mind of the arsonist known as the Fire Dancer who tells some of his own story. I enjoy her writing because she hides the bad guy from me so well while adroitly laying out her clues. She excels at well-placed clues and red herrings. Coble also shows the dangers of jealousy and covering up sin.
Fire Dancer is an exciting read, but some of Coble's clues and motivation don't add up. We're told how Tess gets in the barn, but not why her parents can't get out if they and she got in. At times the arsonist tries to kill Tess, but he tells of how he wants to die with her in a fire. The reader doesn't notice these problems and others until reflecting later. In spite of these problems, Fire Dancer is vintage Coble and her fans will look forward to this new series as I do.  Debbie W. Wilson, Christian Book Previews.com

▼▲
I'm the author/artist and I want to review Fire Dancer.
Back
Back