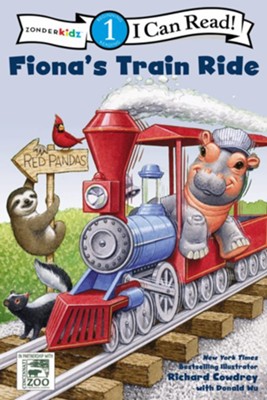 Join Fiona the hippo, the adorable internet sensation from the Cincinnati Zoo and Botanical Gardens, as she and her friends take a train ride at the zoo!

Fiona wants to visit the new baby red panda, but it is so far! What better way to get around the zoo than the fun and fast zoo train. Young readers will enjoy learning more about Fiona and her friends in this Level One I Can Read about the little hippo that has captured hearts around the world with her inspiring story and plucky personality.

Fiona’s Train Ride?is one title in an I Can Read series that focuses on Fiona the hippo. Other titles include:?Meet Fiona, Fiona Saves the Day, Fantastic Fiona, Fiona and the Rainy Day,?and?Fiona Goes to School.

Richard Cowdrey’s favorite things to draw and paint are the things that reflect the awesomeness of God and his creation. From vast landscapes to the littlest bug on a leaf, Richard marvels at the beauty in the details. Richard's bestselling children's books include Fiona the Hippo, Legend of the Candy Cane, Bad Dog, Marley and A Very Marley Christmas.

Donald Wu was born in Hong Kong and grew up in Oakland, California. His passion for drawing and comic books led him to attend California College of the Arts where he studied illustration. He has been working full time in the field of children’s illustration for over 15 yrs. First in traditional mediums he now does all of his art digitally. Donald’s professional credits include Dogerella and A Dog’s Life among others.

When Donald is not spending the majority of his day in his home-studio surrounded by toys and books, he can be found out on the bay paddling with his dragon boat team, Donald currently lives in the SF bay area with his wife Leanne, son Nolan, daughter Violet and dog Honey.

▼▲
I'm the author/artist and I want to review Fiona's Train Ride: Level 1.
Back
Back