Skip to main content
Finishing Well: The Adventure of Life Beyond Halftime
By: Bob Buford
Stock No: WW330707 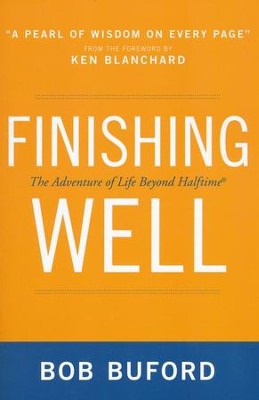 Finishing Well: The Adventure of Life Beyond Halftime

▼▲
Based on inspiring interviews with 60 remarkable people who have furthered their significance rather than to rest on their success. Includes trailblazers such as Peter Drucker, Roger Staubach, and Ken Blanchard.

Author Bob Buford called them "code breakers." They are people age 40 and older who have pioneered the art of finishing well in these modern times, and who can teach us to do the same, starting today. Buford sought out 60 of these trailblazers--including Peter Drucker, Roger Staubach, Jim Collins, Ken Blanchard, and Dallas Willard--and has recorded their lively conversations in these pages so that they can serve as "mentors in print" for all of us.

"Twenty years from now," Buford writes, "the rules for this second adulthood as a productive season of life may be better known. But for now, we're out across the frontier breaking new ground."

Buford gives you a chance to sit at the feet of these pioneers and learn the art of finishing well so you can shift into a far more fulfilling life now, no matter your age, and pursue a lasting significance that will be a legacy for future generations.

Bob Buford is an entrepreneur who in the first half of life grew a successful cable television company. In his second half, Buford founded the Halftime Institute, an organization designed to teach, coach, and connect marketplace leaders to discover God’s calling in their lives. He also started Leadership Network, an organization that seeks to accelerate the emergence of effective churches by identifying, connecting, and resourcing innovative church leaders. For outstanding stories, great resources, events, and program information to help you on your Halftime journey, please visit www.halftimeinstitute.org.

▼▲
I'm the author/artist and I want to review Finishing Well: The Adventure of Life Beyond Halftime.
Back
Back