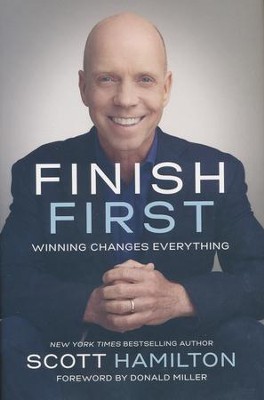 ▼▲
From Olympic gold medalist Hamilton comes a message for achievers in every arena: "Go for the win!" Asserting that competition is not only OK but imperative as a motivator for excellence, he issues a wake-up call to business leaders, entrepreneurs, teachers, coaches, students, and families. Stop settling for mediocre---and embrace your intrinsic will to succeed. 208 pages, hardcover from Nelson.

Go for the win! Achieve excellence and be better than you’ve ever been!

In his years as a professional ice-skater, Olympic Gold Medalist Scott Hamilton learned to embrace the mind-set of working hard to "beat" the competition. But it seems competition has gotten a bad rap these days. We’ve bought into the belief that it is unfair to participants to rank performance. Yet competition is in fact a good thing because it’s about working toward excellence.

Finish First is a wake-up call for business leaders, entrepreneurs, spouses, parents, and even students to stop settling for mediocre and begin to revitalize their intrinsic will to achieve excellence and go for the win. Most of us feel we were made for something more, but we’re often afraid to allow ourselves to be competitive because we think our finishing first might somehow rob others of their chance to shine. This book encourages the hidden potential, the champion within all of us, to come out—which eventually brings our family, marriage, career, business, and the world around us the greatest possible good.

Scott Hamilton is a living example of good guys who finish first. He is a New York Times bestselling author, Olympic champion, cancer survivor, broadcaster, motivational speaker, author, husband, father, eternal optimist, and firm believer that the only disability in life is a bad attitude. For more than twenty years, Scott has inspired audiences around the world with the story of his life and how he has overcome adversities. He lives near Nashville with his beautiful wife, Tracie, and their four amazing children.

▼▲
I'm the author/artist and I want to review Finish First: Winning Changes Everything.
Back
Back