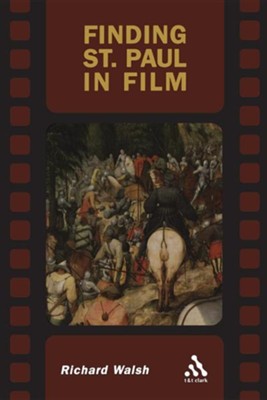 Unlike Jesus, Paul has not appeared often in the movies, either as a leading man or as apart of the supporting cast. In fact, Walsh's search of "Saint Paul" at the InternetMovie Database (IMDb.com) found only two movies. Ingenious and enterprising scholars, like RobertJewett, Larry Kreitzer, and Roland Boer have brought Paul to the movies, however, by discovering Paulineimages, motifs, and texts in various "secular" films. In Finding Saint Paul in the Movies, Walsh find a Paul who is a stranger to our questions and ideologies. As Paul does not appear often in film, the films that the book brings into dialogue with Paul have only metaphorical connections with the Paul of Christian and academic discourse. The films relate to Paul only as Walsh's interpretations of the films and of Paul render Paul the films' precursor. Walsh's book works more abstractly. It has four major topics distributed in an equal number of chapters: (1) Paul's concept of grace (the inclusion of the Gentiles); (2) Paul's apocalyptic visions and worldview; (3) Paul's struggles with theodicy and community formation; and (4) Paul's "apostolic" or "canonical" status. He examines movies such as Tender Mercies, Star Trek II: The Wrath of Khan, Places in the Heart, Donnie Darko, Witness, The Truman Show, Strange Days, Being John Malkovich, Fargo, Crimes and Misdemeanors, and The Apostle.

▼▲
I'm the author/artist and I want to review Finding St. Paul in Film.
Back
×