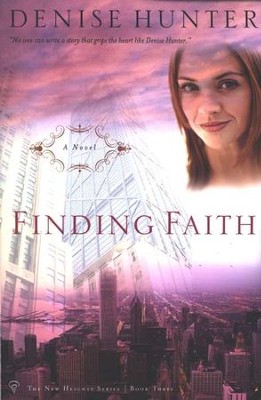 ▼▲
Set in the high-pressure world of a Chicago television newsroom, author Denise Hunter brings to life a story of intrigue and integrity, of secrets divulged and promises kept. Paula Landin-Cohen's new job as an investigative reporter quickly puts her in the spotlight as she pursues a story that Becomes nationally followed as the Switched at Birth Mystery. Finding what really happened to the young couple's baby will assure her a coveted role as news anchorwoman but she also faces the challenges of a shaky marriage, a colleague who fiercely asserts his desire for the job, and a past decision that haunts her.

▼▲
Set in the high-pressure world of a Chicago TV newsroom, award-winning author Denise Hunter brings to life a heartwarming story of love and pain, desperate choices with dire consequences, and honesty and redemption. "If you like Karen Kingsbury or Nicholas Sparks, this is an author you’ll love as much as I do" (Colleen Coble, author of Alaska Twilight).

One woman sacrificing everything for her career. A young girl’s longing for acceptance. And the road to forgiveness&hellip;

Paula Landin-Cohen, an investigative reporter, feels like a fish out of water in the small town of Jackson Hole, Wyoming. Then she’s offered her dream job, as a TV reporter in Chicago. There is so much to gain and so much to lose&hellip;including the only man she’s ever loved.

Linn Caldwell has made a lot of mistakes—bad mistakes. She can never forgive herself for all the pain she’s caused others. How can she dare to get close to anyone again?

What will happen if Paula and Linn’s secrets are revealed? Will the men they love ever be able to forgive them?

Finding Faith is the third novel in the New Heights series, after Mending Places and Saving Grace.

▼▲
Denise Hunter is the internationally bestselling author of more than twenty-five books, including A December Bride and The Convenient Groom, which have been adapted into original Hallmark Channel movies. She has won The Holt Medallion Award, The Reader’s Choice Award, The Carol Award, The Foreword Book of the Year Award, and is a RITA finalist. When Denise isn’t orchestrating love lives on the written page, she enjoys traveling with her family, drinking green tea, and playing drums. Denise makes her home in Indiana where she and her husband are rapidly approaching an empty nest. You can learn more about Denise through her website DeniseHunterBooks.com or by visiting her Facebook page at Facebook.com/AuthorDeniseHunter.

▼▲
Paula Landin-Cohen is keeping a terrible secret from her husband, and its tearing her marriage apart. In Finding Faith by Denise Hunter, Paula learns the importance of honesty, as well as the difficulty of possessing it. The hope of a promotion urges her to investigate the identity of a three-year-old girl called Faith, but the investigation stirs up memories that Paula has tried to bury.
The novels beginning was slow, but before long I couldnt wait to see what would happen to the characters, and how all the bits of plot would fit together. Unfortunately, there are some pieces that dont seem to fit anywhere. Paulas marriage often seems trite and not much deeper than the fickle relationships teenagers find themselves infine one moment and barely intact the next.
For the most part, the characters are refreshingly imperfect. They make mistakes, suffer the consequences, and learn from the ordeals in a way that the reader can identify with. Paula is pleasant, and slightly flirtatious, but she is also a selfish woman. Her career comes first. Linn is a delightful young woman who has made some bad choices and is suffering the consequences. But though she is trying hard to get her life back on track, she finds herself falling into the same traps that led her here. Davids role as Paulas husband is quite nondescript; he alternates between being a kind and loving mate who calls frequently and genuinely cares about Paula, to other times being a distant man who doesnt talk to her unless he has to, depending on which would better add to the drama of the moment. And the parents of Faith are picturesque parents who truly care for their daughter, coping with her Cerebral Palsy, and who are the solid example of a good Christian couple in this story.
When Paula has a chance to leave home for awhile in hopes of a chance at her dream job, she leaves without hesitation. Not long after she moves to Chicago, she is approached by a family that is desperate to find out the real identity of their daughter, Faith. Paula agrees to help the small family, knowing that if she helps them it will nearly secure her the promotion. Yet, it is too close to her painful past for comfort. The disentanglement of events means the unraveling of everything she thought was constant in her own little world.
Finding Faith was a fun book to read. It has a good mix of serious moments and lighthearted ones. The story does mentionand features characters who participated inabortion and adultery. Paula herself does not see anything wrong with abortion for most of the book. However neither action is portrayed in a positive light; the consequences are terrible.
Though it is book three in a series, the story stands very well on its own. It is a narrative of love and excitement, and filled with applicable truths. I would recommend this book to any woman who doesnt mind a romance novel that delves a little deeper than most dare.  Sarah Haines, Christian Book Previews.com

▼▲
I'm the author/artist and I want to review Finding Faith, New Heights Series #3.
Back
Back