Skip to main content
BIBLE SALE OF THE SEASON: Save on over 2,100 Bibles thru 10/26. >
Finding Calcutta: What Mother Teresa Taught Me About Meaningful Work and Service
By: Mary Poplin
Stock No: WW834723 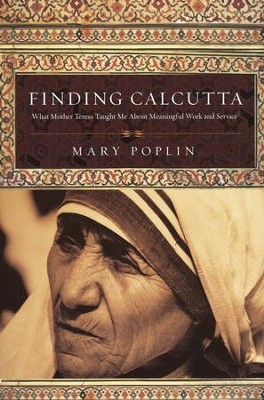 Finding Calcutta: What Mother Teresa Taught Me About Meaningful Work and Service

▼▲
Mother Teresa believed that we must each find our own Calcutta--the place where you're called to serve others and God. Mary Poplin had only been a Christian for 3 years when in 1996 she traveled to India to work with Mother Theresa and the Missionaries of Charity. Finding Calcutta is her memoir of that time and all she learned about service, humility, compassion and spirituality--and how she's applied her experience to the rest of her life and work. Paperback.

▼▲
"Find the sick, the suffering and the lonely right there where you are. . . . You can find Calcutta all over the world, if you have the eyes to see." --Mother Teresa Lifelong educator Mary Poplin, after experiencing a newfound awakening to faith, sent a letter to Calcutta asking if she could visit Mother Teresa and volunteer with the Missionaries of Charity. She received a response saying, "You are welcome to share in our works of love for the poorest of the poor." So in the spring of 1996, Poplin spent two months in Calcutta as a volunteer. There she observed Mother Teresa's life of work and service to the poor, participating in the community's commitments to simplicity and mercy. Mother Teresa's unabashedly religious work stands in countercultural contrast to the limitations of our secular age. Poplin's journey gives us an inside glimpse into one of the most influential lives of the twentieth century and the lessons Mother Teresa continues to offer. Upon Poplin's return, she soon discovered that God was calling her to serve the university world with the same kind of holistic service with which Mother Teresa served Calcutta. Not everyone can go to Calcutta. But all of us can find our own meaningful work and service. Come and answer the call to find your Calcutta!

Mary Poplin (Ph.D., University of Texas) is professor of education at Claremont Graduate University in California, where she has served as director of the teacher education program and dean of the School of Educational Studies. Poplin works on the application of the intellectual, social and psychological principles of the Judeo-Christian worldview as they apply to higher education, particularly among culturally and linguistically diverse peoples and the poor. She has been a presenter about Mother Teresa's influence and legacy at Veritas Forums across the country.

" Finding Calcutta is an intriguing journey of faith and insight as Mary Poplin discovers how to integrate her newfound faith into her well entrenched academic world. Her forthright approach is refreshingly honest without becoming an expose. Her practical understanding of Mother Theresa's faith and resultant purpose would be appreciated by Mother Theresa herself for the glory brought to God."

"Having been the spiritual director of the Missionaries of Charity in Asia for many years, I read Mary Poplin's book with keen interest and fond memories of these remarkable women. Finding Calcutta is a love story between God and two women, Mother Teresa and the author. In describing her encounter and the lessons learned with 'God's pencil,' Mary Poplin has penned 'something beautiful for God.' This book not only captures the spirituality of Mother Teresa and her sisters but also reminds us of an important principle in spiritual formation that God taught its author: our own Calcutta is most often right smack where we are."

-- Albert Haase, O.F.M., director, School of Spirituality at Mayslake Ministries, and author of Coming Home to Your True Self: Leaving the Emptiness of False Attractions

"Mary Poplin seeks to integrate her experience with Mother Teresa into her work and life and to come together with others who hunger and thirst. This book can be a platform to gather those of us so disposed so that the flame is not lost and will continue to produce abundant fruit, fruits of eternal life."

"Mary Poplin takes us on a pilgrimage toward clarity about who we are and what our life amounts to. The pilgrimage is simultaneously through Calcutta and through the heart of the 'sophisticated' dynamics of university life in America. As it proceeds we gain a better understanding of the social forces that govern the university in the name of intellect--but falsely so. It will be of special help to those engaged in academic life, at whatever level. They will find here a guide who has been grasped by God and enabled to see that life and the surrounding cultural world for what they really are, and what under God they could be."

-- Dallas Willard, professor of philosophy, University of Southern California, and author of The Divine Conspiracy and Hearing God

" Finding Calcutta is a must read for anyone interested in learning more about Mother Teresa and the Missionaries of Charity in Calcutta and understanding the dynamics behind their work and service."

"While on one level, Finding Calcutta is a reflection of one woman's interaction with Mother Teresa and the Sisters of Charity, it is also a deeper call to the readers to discover their own 'Calcutta' and to live there with the same measure of abandon. The simplicity and focus of the sisters in Finding Calcutta helped me acknowledge that the small ways I move toward offering my life (even addressing those darn shopping addictions) can be as 'beautiful for God' as an irresistible revolution."

"A profound journey of the heart, head and hands in which Mary Poplin discovers her own 'Calcutta'--the classroom with its students in whom seeds of life must be sown for the life of the world to come."

-- Kelly Monroe Kullberg, founder, The Veritas Forum, and author of Finding God Beyond Harvard: The Quest for Veritas

"Mary Poplin's pilgrimage of discovering Christ among the most vulnerable of the world's poor is an accessible and inspiring invitation to us all. Her honesty, thoughtfulness and reflections are an important provocation for those who find their realities separated from our sisters and brothers who suffer today. Mary does an excellent job of building the bridges between the insulated and isolated lack of experience of poverty in academia and the oppression and injustice on the streets of one of the world's poorest cities. Her interactions and stories of Mother Teresa and the Missionaries of Charity are a true glimpse of grace and a sweet reminder that God is with and among those who suffer most. Honest, thoughtful and reflective, Finding Calcutta will challenge you to love more freely where you find yourself."

"Mary Poplin's spiritually nurturing account of her experiences with the Missionaries of Charity in Calcutta is a loving portrait of a true work of God. In these pages readers encounter Mother Teresa's deep spiritual wisdom as a call to reflection, repentance and a renewed concern for 'the poorest of the poor' as bearers of Christ's image. There is spiritual refreshment here for believer and doubter alike."

-- James A. Herrick, Guy Vander Jagt Professor of Communication, Hope College, author of The Making of the New Spirituality and Scientific Mythologies

"Mary Poplin found her first Calcutta in India as she volunteered in Mother Teresa's ministry to the poorest of the poor. She found her second Calcutta in her own university as she returned to recognize that the poorest of the poor are not always those with no material wealth but those with no knowledge of God and nowhere to find it. The story of her transformed spiritual life segues beautifully into the story of her transformed academic life. An exciting book of great wisdom."

-- James W. Sire, author of The Universe Next Door and Habits of the Mind

"In this poignant, elegant, humble memoir, Poplin gives us far more than Mother Teresa or even another Mother Teresa story. She gives us instead the Jesus and the Christianity that operated through Mother Teresa. Poplin's experience of finding Calcutta irrevocably changed her soul. It will change yours as well."

"If you've ever wondered what it would be like to be a worldly California academic curious enough to volunteer in Mother Teresa's Calcutta Mission, prepare to be surprised. After struggling to translate her experience there for a secular audience, Dr. Poplin has ended by translating her readers into Mother Teresa's own unfamiliar, spiritual dimension. Watch out--you will not be able to keep from meditating."

-- C. John Sommerville, author of The Decline of the Secular University

▼▲
I'm the author/artist and I want to review Finding Calcutta: What Mother Teresa Taught Me About Meaningful Work and Service.
Back
Back