Skip to main content
Our Father Abraham: Jewish Roots of the Christian Faith
By: Marvin R. Wilson
Stock No: WW877338 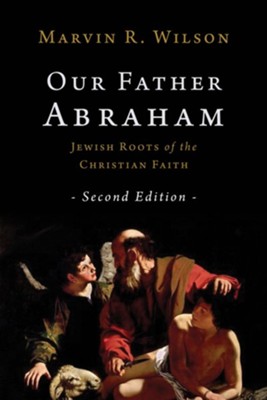 Our Father Abraham: Jewish Roots of the Christian Faith

▼▲
Exploring the vital link between Judaism and Christianity, Wilson traces their common ancestry back to Abraham, explaining why followers of Christ should examine their Semitic heritage to rediscover a more authentic biblical understanding of their origins. Discussion questions make this a rich resource for interfaith groups. Includes updates, an expanded bibliography, and two new chapters. 424 pages, softcover from Eerdmans.

Although the roots of Christianity run deep into Hebrew soil, many Christians remain regrettably uninformed about the rich Jewish heritage of the church. Our Father Abraham delineates the vital link between Judaism and Christianity, exemplified by the common ancestry of the two faiths traceable back to Abraham. Marvin Wilson calls Christians to reexamine their Semitic heritage to regain a more authentically biblical understanding of what they believe and practice.

Wilson, a trusted voice among both Jews and Christians, speaks to both past and present, first developing a historical perspective on the Jewish origins of the church and then discussing how the church can become more attuned to the Hebraic mindset of Scripture. Drawing from his own extensive experience, he also offers valuable practical guidance for salutary interaction between Christians and Jews. Discussion questions at the end of each chapter make this book especially suitable for use in groups—Christian, Jewish, or interfaith—as readers strive to make sense of their own faith in connection with the other.

The second edition of Our Father Abraham features a new preface, an expanded bibliography of recent relevant works, and two new chapters: one that discusses Jewish-Christian relations after the Holocaust and another that reflects on Wilson’s own fifty-plus-year career as an evangelical Christian deeply committed to interfaith dialogue. As Christians and Jews feel a growing need for mutual support in an increasingly secular Western world, Wilson’s widely acclaimed book will offer encouragement and wise guidance toward this worthy end.

▼▲
Marvin R. Wilson, a leading scholar on Christian-Jewish relations, is the Harold J. Ockenga Professor Emeritus of Biblical and Theological Studies at Gordon College, Wenham, Massachusetts, where he taught for over fifty years. He also wrote Exploring Our Hebraic Heritage-a sequel to Our Father Abraham-and served as primary scholar of the award-winning national television documentary Jews & Christians: A Journey of Faith, based on Our Father Abraham.

▼▲
"Magisterial. When Jews read Our Father Abraham, they will recognize themselves in it. Marvin Wilson knows us as we know ourselves. This book is born of scholarship by a faithful Christian who is in love with the Jewish people and the God of Israel. When Christians come to know Jesus in his Jewish setting and understand through Marvin Wilson’s work that the church continues to be nurtured by its Jewish roots, then Christianity will be truthful to itself, and the Jewish people will be much more secure. We are all in debt to this venerable scholar, a rare man of faith."
— Rabbi Yehiel E. Poupko
Rabbinic Scholar at the Jewish Federation of Chicago

"The timeliness of Marv Wilson’s book was evident by its initial reception and growing audience over the years. Three decades later, this second edition shows the timelessness of both the subject and his insights."
— James Whitman
Center for Judaic-Christian Studies

"Our Father Abraham is a stunning achievement! Marvin Wilson has written a magnificent book that breaks new ground in furthering positive Christian-Jewish relations. His superb scholarship is combined with many concrete suggestions for building a new relationship between the church and the synagogue, between Christians and Jews."
— Rabbi A. James Rudin
The American Jewish Committee

"An ambitious book, sweeping in scope. Wilson has thrown down a theological gaunt&not;let, challenging Christians of all kinds to reform a two-thousand-year-old history of misunderstanding Jews and misinterpreting our own sources. Our Father Abraham does not pretend to be the last word in the dialogue, but it is a powerful first salvo!"
— Carl E. Armerding
Regent College

"For too long discussion of the Jewishness of Jesus has remained academic. Few schol&not;ars have had the interest or ability to unfold the practical meaning of the Gospels’ Jewish roots for today’s church. Wilson has finally filled that void. And the result is simply revolutionary. For the first time someone has given the person in the pew an understanding of just what the Jewishness of Jesus means for his or her everyday life."
— Jerusalem Perspective

"A distinctive exposition of what it means for today’s church to be part of Abraham’s spiritual family. . . . Refreshing and enlightening."
—Journal of Religion

"A magnificent achievement in calling the entire body of Gentile Christianity to reassess the great religion to which it is permanently indebted."
— Christian Scholar’s Review

"A thoroughly fascinating and enjoyable book. . . . Wilson’s goal is to show the Jewish roots of Christianity and of Jesus . . . and improve interfaith understanding. He suc&not;ceeds brilliantly."
— Jewish Advocate

"A major breakthrough for evangelicals working in the area of Christian-Jewish relations."
— Journal of the Evangelical Theological Society

"It is undoubtedly Wilson’s intention that all of us come to see our differences as more concerned with means than ends, and to a great degree he succeeds. I recommend this book to anyone with a well-thumbed Bible, but especially to church and synagogue groups (together, whenever possible) who are interested in finding out where the other half lives."
— Journal of Ecumenical Studies

▼▲
I'm the author/artist and I want to review Our Father Abraham: Jewish Roots of the Christian Faith.
Back
Back