Skip to main content
BIBLE SALE OF THE SEASON: Save on over 2,100 Bibles thru 10/26. >
Famously Funny! A Collection of Beloved Stories and Poems - Audiobook on CD
By: Jim Wiess
Stock No: WW513835 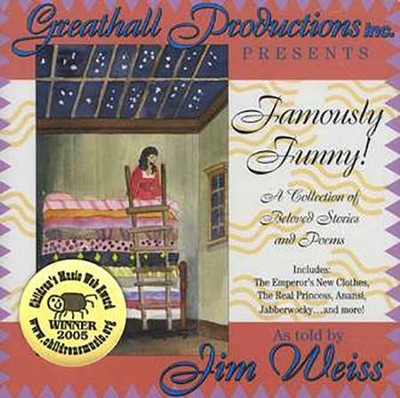 Famously Funny! A Collection of Beloved Stories and Poems - Audiobook on CD

▼▲
Jim Weiss' storytelling recordings have received the highest awards from Parents' Choice Foundation, Oppenheim Toy Portfolio, Storytelling World, and many others as well as have been widely praised by major publications around the world. He has captivated and delighted child and adult audiences with his original stories and retellings of ancient and modern classics. Stories include: The Princess & the pea, Father William, Anansi the Mighty, The Yak, The Emperor's New Clothes, Jabberwocky, The Tiger, the Brahman and the Jackal, and The Duck and the Kangaroo. 1 CD. 70 minutes.

▼▲
I'm the author/artist and I want to review Famously Funny! A Collection of Beloved Stories and Poems - Audiobook on CD.
Back
Back