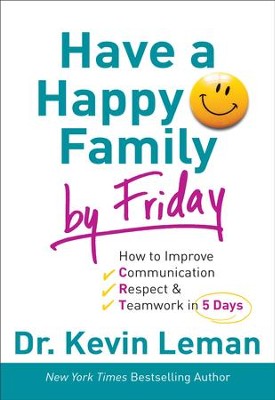 Have a Happy Family by Friday: How to Improve Communication, Respect & Teamwork in 5 Days - eBook

Does it seem that everybody in your household wants a piece of you and there's nothing left to give? Do you wish things were different? Dr. Leman says wishes can come true! Helping you build a family grounded in unconditional love, he shows how to communicate honestly, prioritize, encourage positive behaviors, make time together count, and build unity as a family. eBook Version.

▼▲
Every member of a family plays a vital role in the health and happiness of the household. Everyone is important, deserves to be treated with love and respect, and needs to know that when they make mistakes they will still be loved unconditionally. And when every member of the family is pulling for each other and on the same team, everybody wins. But is this kind of family life even possible?

Parenting expert Dr. Kevin Leman says it is, and he's ready to show moms and dads exactly how they can make it happen in their family--in just five days. He shows families how to

As always, Dr. Leman's outstanding advice is laced with humor, great stories, and the wisdom that comes only from a lifetime of experience.

For parents who've had it up to here with bickering, hurt feelings, and emotional exhaustion, Have a Happy Family by Friday is just what the doctor ordered.

▼▲
Dr. Kevin Leman is an internationally known psychologist, radio and television personality, and speaker who has taught and entertained audiences worldwide with his wit and commonsense psychology. He has made house calls through hundreds of radio and television programs, such as Fox & Friends, Fox's The Morning Show, Today, The 700 Club, CBS's The Early Show, James Robison's Life Today, In the Market with Janet Parshall, CNN's American Morning, and Focus on the Family, and has served as a contributing family psychologist to Good Morning America. A bestselling and award-winning author, Dr. Leman has written more than fifty books about marriage and family issues, including The Birth Order Book, Making Children Mind without Losing Yours, and Have a New Kid by Friday. Dr. Leman and his wife, Sande, live in Tucson, Arizona. They have five children and four grandchildren.

Top 10 Countdown to Having a Happy Family by Friday

10. Spend your time on what's important. All else can wait.
9. Put relationships before things.
8. Focus on and encourage what your kids do right rather than eagle-eyeing what they do wrong.
7. Choose your priorities wisely, with the long term in mind.
6. Be the first to laugh at yourself and create fun.
5. Expect the best and you'll get the best.
4. Don't outsource your children. The best gift you can give - yourself - doesn't cost a dime.
3. Keep your calm even during a crisis.
2. Don't hold grudges. Wipe the slate clean at the end of each day.
1. Remember that the words you choose to use with your loved ones will change their lives.

If you've thought of selling two of your children and arranging a long-term loan of the third and an exciting evening with your spouse is no yelling in the background and no trips to the ER, then Have a Happy Family by Friday is just what the doctor ordered. Dr Kevin Leman, beloved international psychologist, parenting and relationship expert, provides the prescription for a 5-day action plan that really works to change your home from the stressful one it can be to a happy, emotionally healthy one that benefits every family member. What Dr. Leman did for parents in his New York Times' bestselling Have a New Kid by Friday, he does for the entire family in Have a Happy Family by Friday.

Using his trademark humor and commonsense psychology, Dr. Leman deals with the issues that can turn a home into a combat zone. He gives parents the tools to: communicate effectively in ways family members will listen; juggle the "Big 5" (time, priorities, activities, work, finances); navigate the perfect storm of toddlers, teenagers, and all ages in-between; tweak their roles at home; and make time together for lasting connections. Want a home that's filled with kindness, cooperation, love, and laughter? You can have it! With Dr. Leman's time-tested principles, you can have a family that learns together, plays together, and, even more, likes each other.

Whether you're married or single, you have it in your power to change your family's world. And it all starts with a simple principle: "Your kids don't care what you know until they know you care." Every member plays a vital part in the development and well-being of the family unit. All need to contribute in their own unique ways and be treated with love and respect. Is this kind of family life even possible? You bet! Join the millions of families who have already benefited from Dr. Leman's principles and reap the kind of rewards that last a lifetime.

▼▲
I'm the author/artist and I want to review Have a Happy Family by Friday: How to Improve Communication, Respect & Teamwork in 5 Days - eBook.
Back
×
Back
×